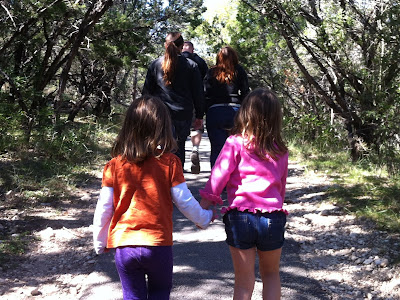 Here are a few highlights from our family’s first camping trip together (plus one, with Noel’s friend too). We went to Neal’s Lodges in Concan, Texas last weekend, the weekend before Halloween. Blue Eyes says that, since we stayed in a cabin, we can’t call it camping, but I cooked on a fire twice, so I think it counts. Some would say I should have known this campground would be a little different, since Neal’s Lodges’ web site had a picture of two grown men dressed like Kiss on motorcycles, but hey, it was Halloween, right? 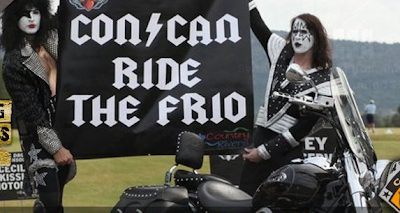 We arrived on Friday night and the girls had fallen asleep on the drive.  When we got to the cabin, I laid down with them, we were all snuggly and they were falling back to sleep when we heard heavy metal music blaring, followed by people screaming.

I explained to the girls that it wasn’t real. Neal’s Lodges was having Haunted Hayrides for older kids on Halloween weekend. It was all pretend, like a play or a TV show. The girls were partially convinced and it would have been fine, it the cycle didn’t repeat every twenty minutes. But it wasn’t too bad, as long as I stayed with them, it just took longer to get back to sleep.

The next morning Sparkles DOMINATED our hike. There were boulders along the side of a hill on the banks of the Frio River and Sparkles charged the hill like a girl on a mission to conquer a new land. She was focused and brave, a little too brave for me, as I followed and stayed close. She was also not impressed by all the long sleeve shirts and pants I packed. She wore her bathing suit bikini top, the one pair of shorts I packed and her cowboy boots. She was amazing.

On Saturday night, Neal’s had a dance, face painting and a costume contest. Blue Eyes, Sparkles, Buttercup and I all wore Wizard of Oz costumes. We were walking to the dance, with Buttercup leading the way, dressed as Dorthy. She was half-skipping, half-running, like three-year-olds do and the path she was taking looked a little like a yellow brick road. Being the Wicked Witch of the West, I felt compelled to raise my arms and make my hands look like claws and run after Dorthy, making scary witch screams. Dorthy/Buttercup laughed and ran faster and I chased faster and she ran faster and the other campers saw us and laughed. We might have won the performance art costume contest, if there was one. At the end of the path, Buttercup stopped laughing and turned around to look at me. She got serious and said, “I don’t want to play that again, Mommy.” I said, “OK.” She said it again, with all the seriousness she could manage, “I DO NOT want to play that again, Mommy.” I said, “DEFINITELY NOT” and we definitely DID NOT. I picked her up, gave her a kiss and carried her to the dance.

Neal’s had trick-or-treating for the kids, with the participating cabins marked on a map. The cabins were decorated and the people were in elaborate costumes. Then we walked up to one cabin, where we saw a very tall man on stilts peeing in the bushes, which is somehow funnier when the man is on stilts. Then someone said, “Kids are coming! Kids are coming!” in a tone of voice so I wasn’t sure if he was talking about the man peeing or maybe something else is going on too. There were a lot of people outside the cabin, it was a party really, where all the women were dressed in super sexy costumes. They realized they were out of candy and the super sexy nurse felt bad, so she went inside and brought out two Dr. Peppers for the girls.

On Sunday, we went to Garner State Park and hiked to the Crystal Cave. This time, it was Buttercup’s turn to DOMINATE. She kept low on the uphill climb, using her hands when it helped and charging forward with determination. This wasn’t the most ideal hike for a three-year-old who doesn’t always look where she is going, since it had elevation and it dropped off some on one side. But I kept close and she didn’t slow down until we got to the cave. The was magical, with itty-bitty crystals that sparkled in the light of the flash light.

I’ll always remember this moment. The little girls slept in the same room as Blue Eyes and I. Buttercup, my sweet Dorthy, woke up on Sunday morning and said, as clear as day, before she lifted her head off the pillow, “There’s no place like home. There’s is no place like home.” She said it twice instead of three times, but it worked anyway. We made it back to Austin, with great memories of our first family camping trip.

This entry was written by Carol, posted on November 2, 2012 at 9:00 am, filed under Mom Stories and tagged Neal's Lodges, camping, concan, halloween, hiking, parenting joys, texas. Bookmark the permalink. Follow any comments here with the RSS feed for this post. Post a comment or leave a trackback.