A Little Too Weird 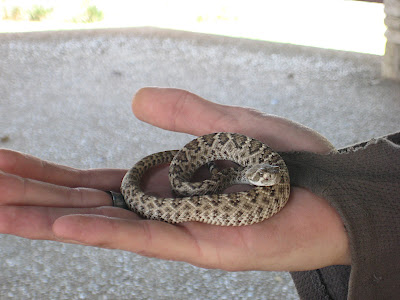 Sparkles, Buttercup and I were at Lady Bird Lake the other day when we met a guy named Shaggy who was holding a baby rattlesnake.

Let me just say that this picture was taken with all of the zoom my snap-n-shoot camera has to offer. And my girls were even further away than that.

Shaggy said, “I don’t think it would be so good for the kids to get too close.”

Yeah, Shaggy, I agree with you on that one.

Shaggy found the rattlesnake and was carrying it around in the side pocket of his cargo shorts.

It is nice to meet people who make different decisions that you do, to keep things interesting, and remind you of different perspectives. But, I was happy for my zoom lens. Shaggy and his baby rattlesnake were a little too weird for me.

A bit later, here are the girls having oranges for a snack with Stevie Ray Vaughn. It was a good afternoon. 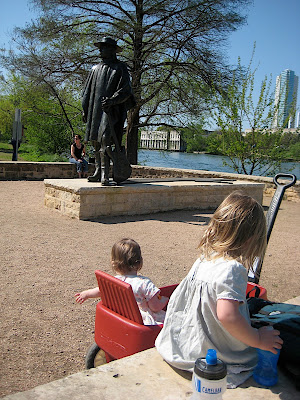 This entry was written by Carol, posted on April 17, 2010 at 9:41 pm, filed under Austin Kids Hike! and tagged austin, hiking, lady bird lake, rattlesnake, stevie ray vaughn. Bookmark the permalink. Follow any comments here with the RSS feed for this post. Post a comment or leave a trackback.