The (Bitter) Sweet Surprise of a Sudden Haircut 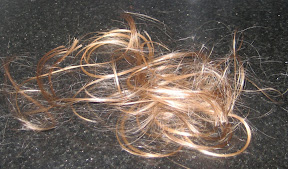 Sparkles called to Blue Eyes and I from the loft and I don’t remember what she said, I just remember seeing the clump of hair in one hand and the scissors in the other.

She wanted a haircut. No one ever said “Don’t cut your own hair,” so she did.

It was a very sudden haircut.

Part of my brain panicked and reached for the phone to dial 9-1-1.

The rest of my brain quickly took over and Blue Eyes and I played it cool.

I made an appointment with a hair dresser. Blue Eyes told her, just so she knows, that it is not OK to cut your own hair, until you are at least eighteen or you have graduated from beauty school, and preferably both. 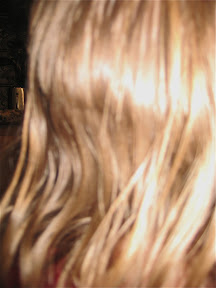 Her hair is a pixie cut of sorts on the back of her skull, very thin, with lots of layers, then there is a thin layer of long hair at the bottom. Which was a fortunate style choice, I think, because the cuts were all on the back of the head, which she can’t see, so it can’t freak her out, and because she left the bottom layer, so you can’t really tell (with a little help from the hairdresser), as long as you are an adult standing up and not looking too close.

Yes, it was a sudden haircut, but it was just one of those (bitter) sweet surprises that kids bring you that you will laugh about later, so why not start now.

This entry was written by Carol, posted on January 4, 2011 at 8:07 am, filed under Mom Stories and tagged parenting troubles. Bookmark the permalink. Follow any comments here with the RSS feed for this post. Post a comment or leave a trackback.