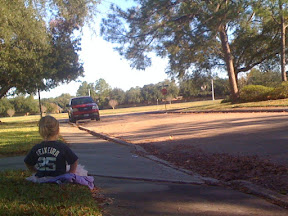 (I know it isn’t Thanksgiving anymore and Christmas is almost tomorrow and that’s OK with me. I hope it’s OK with you too.)

I’m not sure that the tradition of Thanksgiving comes with wishes, but I have one anyway. It came to me when the family was at Grandma’s house for Thanksgiving weekend and Sparkles threw a fit when Blue Eyes and Noel left for my sister’s house without her.

Sparkles ran out of the house, chasing her Dad’s car, until nearly the end of the block, when she couldn’t see it anymore. Then she sat on the grass in a neighbor’s lawn, put her hands on her hips and stared in the direction that her Dad had gone.

She was so determined and passionate and upset.

I explained where her Dad had gone.

I gave her a minute.

But, it was cold outside and I wanted to get back in the house.

I don’t carry my kids kicking and screaming all that often, but I believe that there are times, when a more reasonable agreement can’t be reached, when the parent has to make that call. So I picked her up and headed back to the house and she screamed so I’m sure all the neighbors heard and she kicked so hard that carrying her was a workout, testing my strength and endurance, mentally and physically.

Somewhere in the intensity of that moment, there was a little sliver of my brain left that was able to think and this is what I thought – while I want Sparkles to know I’m in charge and I have the final say and sometimes that means carrying her kicking and screaming, I want that to be rare and only when nothing else at all has worked. I thought maybe I picked her up too early.

I set Sparkles down. She sat on the grass in another neighbor’s lawn, put her hands on her hips and stared in the direction that her Dad had gone. I thought for a minute.

Time wasn’t an issue, we were hanging out at my Mom’s house, but we weren’t on our way somewhere or about to eat. Buttercup was taken care of by my parents and brother, so I didn’t need to worry about her. It had been cold outside, but it was warming up and I noticed that it was actually kind of nice in the sun, where we were now.

I sat down next to Sparkles in the grass and looked in the direction her Dad had gone.

After a minute, her breathing calmed down and she scooted close to me.

I reached for her and pulled her into my lap.

She held my hands and squeezed them a little.

After a minute, she said “I guess Daddy isn’t coming back right now.”

After a minute, I asked, “What if we wait for Daddy inside?”

We walked hand-in-hand back to my parent’s house.

I want Sparkles to learn that when things aren’t going her way, the emotional or brute force responses don’t usually work the best. I want Sparkles to have a graceful approach to frustrating situations and she won’t learn that from a book or a lecture, she will only learn that if I show her, over and over again. So, when she is being SOOOOOOO frustrating, I don’t want to be frustrated, I want this moment especially, to be a moment of grace.

That is my Thanksgiving wish, to find my grace when I need it most, to show it to Sparkles and to know it more for myself.

This entry was written by Carol, posted on December 15, 2010 at 8:30 pm, filed under Mom Stories and tagged holidays, parenting troubles. Bookmark the permalink. Follow any comments here with the RSS feed for this post. Post a comment or leave a trackback.