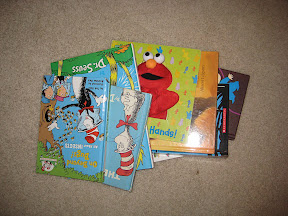 You know when your kid is two-years-old or so and she starts saying things that you didn’t teach her to say? She has original thoughts and ideas and it amazes you? Then, sometimes her ideas are really sweet and that amazes you even more? Sparkles has been doing this for a while now, but I’m still amazed every time.

We moved to a new house a month or so ago and rented our old house to a young couple named Mike and Kelly (these are pretend names). Sparkles met them a couple of times and she is very interested in them, like they are relatives that she knows well but doesn’t see often. She includes them in her conversation at random times and she asks how they are doing when we drive near the old house. She really wants to meet Kelly’s Mom. She isn’t sure why Kelly isn’t living with her Mom.

The other day, Sparkles took out some of her favorite books from her nightstand and made a stack on the floor. She said she wanted to give the books to Mike and Kelly, in case they didn’t have enough books in the old house.

It was so sweet and so much her very own idea. Sparkles, baby, I’m amazed by you. Thanks for making my day.

This entry was written by Carol, posted on July 23, 2010 at 1:21 pm, filed under Mom Stories and tagged dr. suess, elmo, parenting joys. Bookmark the permalink. Follow any comments here with the RSS feed for this post. Post a comment or leave a trackback.