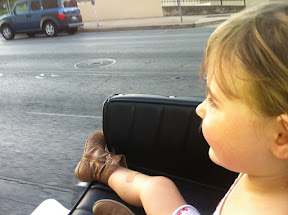 Sparkles and I went downtown the other night to see a play. The play was a youth production, in a downtown church basement on a makeshift stage. It had all the magic of theater that Sparkles needed, but it wasn’t too long and we could sit on the floor up front so she could see better.

Sparkles liked the costumes and the singing. She whispered questions to me, as she tried to figure out what theater was all about. My favorite question was “Can I go say ‘Hi’ to Annie now?” each time Annie left the stage.

Her favorite characters were Annie, Miss Hannigan and Grace Farrell, Daddy Warbucks’ assistant. She went to say “Hello” to each of these actors after the play. She was upset at first when Annie started to take off her red dress right there in front of her. (Annie had regular clothes underneath, so it wasn’t that weird.) When Sparkles explained what happened to Blue Eyes later, she said, “It was OK Dad, it was just a costume.”

After the play, Sparkles and I walked around downtown, watched people and checked out the tall buildings. Then we found out the bike taxis hang out in front of the Driskill hotel. We headed that way and hailed one down.  It was fun to be in the street without a car and car seats and seat belts, when you can see everything all around you and hear the sounds of the city.  It was a fun ride and we couldn’t stop smiling.

We didn’t need anything fancy or expensive, just something a little different, to have an amazing night, in that every day kind of way. I can’t wait to do it again.

This entry was written by Carol, posted on August 10, 2011 at 7:07 am, filed under Mom Stories and tagged annie, austin, bicycle cabs, parenting joys. Bookmark the permalink. Follow any comments here with the RSS feed for this post. Post a comment or leave a trackback.