Hello, My Name is Carol and I Sell T-shirts 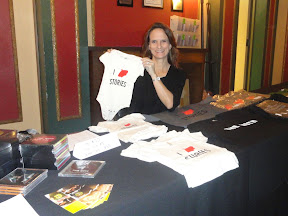 I wanted to dress well without looking like I was trying too hard and you know I’m not a very good dresser, so it took a while. I found just the right sweater to wear with my dark, skinny jeans and a funky/casual/interesting jacket on top, but the sweater was dirty. I washed the sweater and hung it to dry, but it didn’t dry fast enough so I put it in the dryer to dry, which is risky for sure.

The day was complicated: eight hours of work in a six hour day, pick up Noel, pick up the little girls, then eat a granola bar for dinner while driving through rush hour traffic to get downtown by 6pm so I can sell t-shirts.

I was very excited.

I love listening to stories.

I believe that history, science, politics, business and spirituality can all be taught best through stories and stories can change the world.

I love the Moth.

I was honored to be selling t-shirts for the Moth during their show at The Paramount.

I was downtown, just around the corner from the Paramount when I realized my just-the-right sweater was still in the dryer.

I looked down, scared to death. I was pretty sure I was about to show up to school naked.

OK, not too bad. I had my good jeans on, a little black sweater and a lose black cardigan. It wasn’t as good as what I planned, but it could have been a lot worse.

— The show was AMAZING. I was taken away to other worlds and I returned a slightly different person. —

Also, I was AMAZING at selling t-shirts. They didn’t have a lot of inventory, so I made it my mission to sell every last shirt. Near the end, I was looking out for people of certain sizes, to match the shirts we had left, and making a personal pitch to each woman, size small.

Not a single shirt left.

The Moth folks kindly invited me to go to dinner after the show with them. It was like I was fifteen again and I got invited to go back stage at the Journey concert, 1981 Escape tour, but better.

You know how it works when you are in a group and y’all are starting to sit down and you try to pick where you sit, more or less? There were a few folks who worked for the Moth and the story tellers who had performed and I decided to sit by one of the people who worked for the Moth. I wanted to know more about how to get a Moth Slam in Austin and what was up with the Moth Corporate program, but this didn’t work out for me.

My contact from the Moth was on my left, but to her left were her personal, very best,  long-time friends who lived in Texas while she lived in New York and they needed to catch up on all they had missed over the years, so I didn’t get to talk to her at all. At my right were a group of folks from Georgia, where the Moth started on a woman’s back porch, and they had recently done a story telling tour by bus, where the bus broke down a hundred times, but it was the most fun and memorable experience of their lives and it bonded them like family forever and it wasn’t easy to join that conversation. And across from me there was an empty chair.

It was like I just got back stage to find out the Journey had already left.

But, across and to my left was Mike Daisy, a very famous story teller, monologist and performer who had hosted the event and to his left was another person from the Moth. They were friendly and interesting and funny.

I have a story telling group that meets in my living room and we are ready to tell stories for a larger group, but when we tried to move it to a public space, only four people RSVPd to the first night and they were the people telling the stories. We didn’t know how to make the transition.

Then I talked with Issac, from the Georgia group. I told him the empty chair across from me was making me feel alone and he pulled the chair away from the table and moved across from me. He lives in Austin now and he told me about a group is he part of, The Old Murder House Theatre, that recreates movies in a live setting, like when they performed Aliens on Ice.

Oh, my, that sounds fun.

As people finished eating, they got up and mingled some and I met a few more folks.  I introduced myself saying, “Hello, I’m Carol and I sell t-shirts!”

Well, I hadn’t finished my food and I like left overs, but is it cheap and tacky to get a to-go box when you are back stage with Journey? Maybe so, but I wasn’t intimidated anymore so I took my food in a to-go box.

It was 1:00am when we finished our late dinner. Some folks were going to the Driskill Hotel for drinks. I had two equally powerful thoughts:

1. I must have drinks with these people.

Normally, I would chose #1, because I believe in making the choice more likely to end up in a story. But, the next day was my girls’ holiday performance which would require sophisticated logistical coordination to get all the right kids, family, costumes, shoes, extra panties and food in the right place at the right time and this is harder to do when I’m tired. And if we drank for very long, I would get home just as the kids were waking up, which can’t be a fun way to start the day.

The Driskill bar was closed, so they headed to 6th street.

My hands got wet and sticky.

I had tilted the to-go box and gotten sauce all over my coat.

I could drink all night on 6th street, but I would smell like shrimp the whole time.

I smiled.  That was enough story for one night. It was time to go home.

This entry was written by Carol, posted on December 9, 2011 at 9:59 am, filed under Mom Stories and tagged Paramount, austin, moth, story telling. Bookmark the permalink. Follow any comments here with the RSS feed for this post. Post a comment or leave a trackback.