Hello There Rocky, and Goodbye

I was heading to work, which for me, since I work at home, means I was walking through the kitchen, when I saw something strange out of the corner of my eye. Something dark and fuzzy, near the bottom of the clear glass kitchen door. I walked back towards the door and saw… 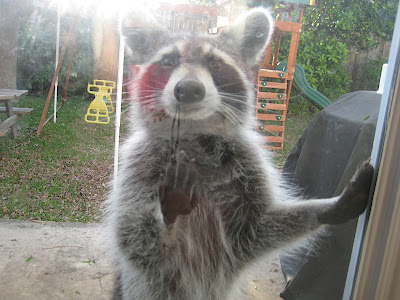 Oh, my. My first instinct was to lock the door. As if my new friend might levitate, grow opposable thumbs and turn the door knob to get inside. My second instinct was to block our cat door with the family safe. Raccoons do know how to use the cat door, they have used it many times before for late-night cat food snacks.

After the house was secure, I thought a little more about what this means. Healthy raccoons don’t stay out during the day and my new friend, I’ll call him Rocky, wasn’t well. He walked around the yard slowly, sometimes laying down to rest, then walking a little more. His arm and leg on the left side shook some, off and on. He seemed to look at me with sad eyes.

I called the city to come get him, but when they came, Rocky climbed a tree and the animal control folks with the city don’t climb trees. 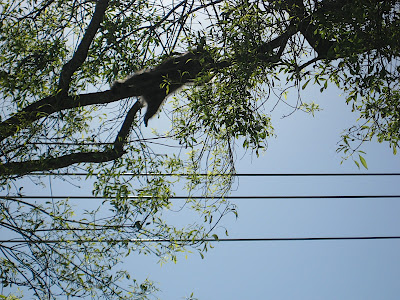 But you know what, the people that climb trees don’t know how to capture sick raccoons. I tried animal rescue places, the game warden and pest control. There isn’t even one tree-climbing-raccoon-trapper in all of Austin.

So I waited. I worked in my office that has a window looking out on the back yard. I watched him in the tree. He was struggling to stay in the tree, losing his balance, recovering, resting, then moving again to find another place to rest. It was sad to watch him, to share this experience with him, to know he wouldn’t be with us much longer.

Then I heard him fall.

He survived the fall, but not very well. He was walking in circles really fast, in a panic, then laying down, then running fast in a circle again. I called the city to come get him.

I had a neighbor stay with Rocky while I picked up the girls from day care. I’m not sure why. Maybe to make sure he didn’t leave the yard and head some where where kids might be. Maybe just so he wouldn’t be alone.

When we got home he was dead. 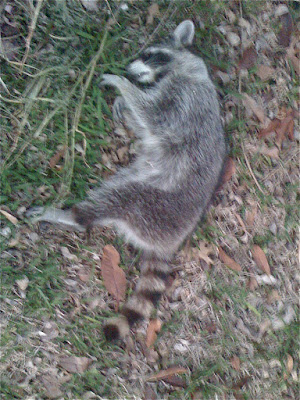 It was sad to see him so still, with all the fight gone from his body. His body was empty in a way that biology couldn’t explain alone. I imagined his spirit had left his body and joined all his family who had died before.

Sparkles wanted to see him and she asked if he was asleep and how long he would stay in our yard.

Then the city called and said they were on the way. I said that Rocky has passed on and they said oh, no, now they can’t come because dead animals are a whole different department. Could I please put Rocky in a box and leave him at the curb?

After the girls were asleep, I put an old towel in a box, laid Rocky on top, wrapped the towel over him and closed the box. I wrote “dead animal” on top, because people leave things for free at the curb a lot in our neighborhood and I didn’t want to surprise anyone. 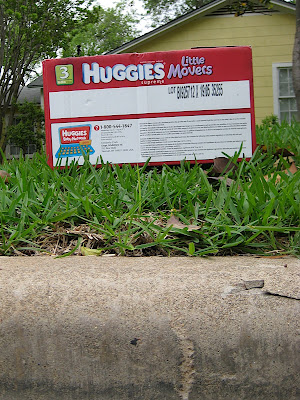 The next day, Sparkles wanted to know what was in the box and I made up a story. She wanted to know where Rocky had gone and I told her he went back to his family. Well, maybe that part was true.

This entry was written by Carol, posted on April 18, 2010 at 1:27 pm, filed under More Austin and tagged austin, dead animal, raccoon. Bookmark the permalink. Follow any comments here with the RSS feed for this post. Post a comment or leave a trackback.