How T. Rex Took a Train to a Tropical Island 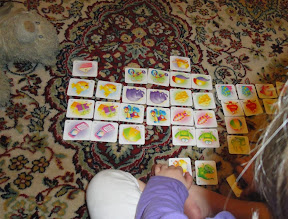 I hear myself say it and I know something is wrong.

“If that is how you are going to play, I don’t want to play with you.”

I’m playing The Memory Game with Sparkles. You know, the one where you put pairs of cards face down in a random order and then take turns turning two over at-a-time, until you find all the matches.

Sparkles is setting the cards out for the next round and she is putting all the pairs side-by-side.

That isn’t how the game is supposed to work. She is making it too easy. That’s when I said I didn’t want to play with her anymore.

There is this space in parenting when you say something that you change your mind about and you have a chance to recover, if you can pause.

I was taking this pause because sounded like a 4-year-old. That couldn’t be good. It wasn’t like she was cheating to make the game easier for just her.  It’s not like I didn’t play the drinking version of Trivial Pursuit in college and I think those rule changes improved the game. And changing the game is a creative process in itself. I wanted to see more.

I gave up my protest and we played the game.

For the next game, she put the pairs one above the other.

For the game after that, she put the pairs together and facing up.

I smiled. If you are really good at making something easy, are you lazy or a genius?

Then Noel sat down with us and saw how we were playing. She added a new rule. She said whenever you pick up a pair, you have to add a sentence to a story about the picture on the cards. Noel is a genius for sure.

That is how T. Rex took a train to a tropical island while the bunny got on a rocket to find the pink teddy bear aliens.

The rule changes had improved the game. I’m glad I was able pause. Parenting feels like a constant balance between structure and freedom, knowing when and how much to have of each so you can learn and have fun and now and then, enjoy the story a T. Rex who takes a train to a tropical island.

This entry was written by Carol, posted on February 13, 2012 at 11:02 am, filed under Mom Stories and tagged parenting joys. Bookmark the permalink. Follow any comments here with the RSS feed for this post. Post a comment or leave a trackback.