I Feel Like I’ve Been Hit By a Car 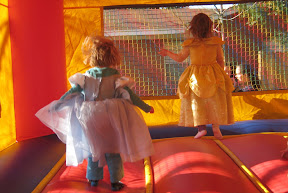 The woman at my front door was confused. She had come to drop off a sleeping bag and birthday present for her daughter who she thought would be at this house for a slumber party of 14-year-olds and she was pretty sure she was in the wrong place.

There were ten mostly-4-year-old girls running around dressed like princesses and there was a huge jumpy castle in the drive way. It looked like a birthday party, but the wrong birthday party, unless she had accidentally traveled back in time about ten years.

I was a little dazed by all the activity and I was trying to get something done on the phone too, but I snapped out of it and told her that she was, indeed, at the right house.

Noel’s 14th birthday party was that night, in about an hour. Noel and six of her closest girlfriends were at Amy’s Ice Creams, they were walking over after.

Noel wanted the jumpy castle for her birthday sleepover. Sometimes she grows up so fast, but she hasn’t forgotten how to be a kid. I hope she never forgets.

We had Jumping John’s bring the castle early, so Sparkles, Buttercup and their play group friends could jump. We invited a few neighbor kids too and a few kids from church.

At about 5:30, the two parties overlapped. Scientists should study the kind of energy this creates. It could power a city for a month. It was a little overwhelming.

A lot had already happened on that day. I had overslept, given a speech at Toastmaster’s, gotten a call to pick up Buttercup at day care, followed-up with the doctor to find our if she is contagious and missed a day of work when I really needed to work.

But, why am I on the phone during all of this?

Oh, I forgot to mention that I DID get hit by a car. On the way to pick up Buttercup. I had stopped to turn left. The driver behind me preferred to not stop, so he tried to swerve around me and didn’t make it. He hit the back corner of my van going pretty fast.

I’ve been on the phone trying to get a rental minivan from the other driver’s insurance company before places closed for the weekend.

But, it was good too. Buttercup wasn’t contagious and she felt fine. My in-laws were at the house a lot of the day, they helped in a hundred different ways, they were amazing. Sparkles and Buttercup had SO much fun, their Grandparents’ visit, the play date and the bouncy castle were all surprises and Sparkles, especially, could hardly contain her joy. Noel had a fun sleepover, with movies on the new TV upstairs and surprise ice cream sundaes. The other driver had good insurance and there was a rental minivan in our driveway by the end of the day.  The girls hadn’t been with me. No one was hurt.

But I hope to not feel quite the same way, at least for another week or so, until another combination of good and bad surprises all happen on the same day.

This entry was written by Carol, posted on January 24, 2011 at 9:46 am, filed under Mom Stories and tagged Bouncy Castle, Car Wreck, Slumber Party, parenting troubles. Bookmark the permalink. Follow any comments here with the RSS feed for this post. Post a comment or leave a trackback.