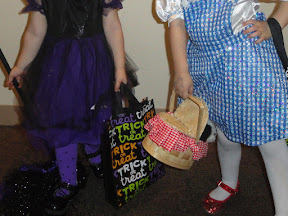 Trick-or-treating at the office when you work at home is strange. I used to work in the office and I know people there, but it has been three years and the people I work with the most are in Minneapolis and India.

It was good to see the people I knew, but I spent a lot of the time saying, “Hello, I’m Carol, I really do work here, nice to meet you.”

Then they would like at Sparkles and Buttercup and say, “Are they twins?”

Buttercup is tall for her age and Sparkles is average and they both have the same pretty blue eyes. I heard it fifteen times at least in one afternoon, “Are they twins?”

And I wanted to say, “Yes, Sparkles is a twin, but her twin sister died and I miss her.” Sparkles’ twin, Grace, died soon after she was born.

That probably isn’t appropriate in a work conversation, especially when you have just met, so I just said, “No, they are a year-and-a-half apart.”

I want to remember Grace, but not all the time when I’m meeting new people. I’m lucky and grateful to have both of my girls, I just wish they didn’t look like twins.

This entry was written by Carol, posted on December 1, 2011 at 3:02 pm, filed under Mom Stories and tagged halloween, holidays, parenting worries, twins. Bookmark the permalink. Follow any comments here with the RSS feed for this post. Post a comment or leave a trackback.