It Was All Pretty AMAZING 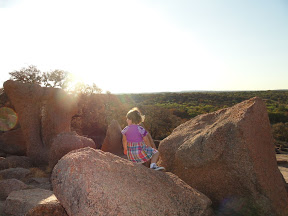 I picked up Sparkles from day care just before lunch. I told her we were going on a surprise trip, just the two of us. She thought that was just about the most exciting idea she every heard.

Sparkles was AMAZED by the hotel. Just AMAZED – AMAZED – AMAZED. Well, for one thing, there were BEDS IN THAT HOTEL ROOM! She had never seen beds that weren’t in someone’s house. She was also AMAZED by the TV, small refrigerator, iron, hair dryer and luggage rack. And then there was the phone. It had a curly cord of some kind attaching the receiver to the base. She had never seen that before.

Then I dropped off Sparkles at day care and traded for Buttercup. Now, Buttercup is only two-and-a-half. She wasn’t likely to even notice that we were in a different city, but we did it anyway.

Buttercup was less AMAZED and more just happy to spend time together. Since it didn’t rain on our night, we got to see bats emerge from a cave near town. She loved the ice machine at the hotel and was just tall enough to get ice by herself. We took the easy path at Enchanted Rock and I carried her by piggy back to get back to the car, because she was so tired.

Some times there is magic in an ordinary day, in being present and noticing the little things. Other times, there is magic in creating a day that is extra-ordinary, that is a super adventure and something to remember. We roll both ways at our house and for me, that is pretty AMAZING.

This entry was written by Carol, posted on October 21, 2011 at 9:26 am, filed under Mom Stories and tagged parenting joys. Bookmark the permalink. Follow any comments here with the RSS feed for this post. Post a comment or leave a trackback.