Grown Up Time with Jon Stewart 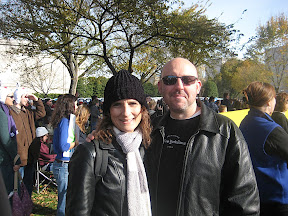 Look at that. There we are. Blue Eyes and I. On our own. Out of Town. Doing grown-up things like eating at restaurants without kids meals, staying out late and sleeping in, having long, uninterrupted conversations and attending Jon Stewart and Steven Colbert’s Rally to Restore Sanity and/or Fear in Washington D.C. 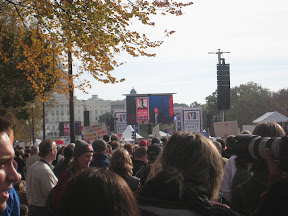 This photo maxes out my zoom lens so you can see, well, not the stage exactly, but the Jumbotron. The stage is beyond that. The Mythbusters guys led the rally in the wave, from the stage to the end of the crowd. We were far from the front, but we were 17 seconds into a 56 second wave.

My favorite parts of the rally:

To sum it up in a word, it was patriotic. It was about loving your country and how to love it well by being willing to listen and being kind.

There were lots of smart and/or funny signs at the rally, here are a few favorites:

I will pass along advice from Tony Bennett – Please vote on Tuesday.

I saw one more funny sign on the plane, not related to the rally. It was outside the airplane bathroom. I didn’t know airlines needed a sign for this and I’m not sure if the people who need the sign are the same people who obey signs, but here it is. 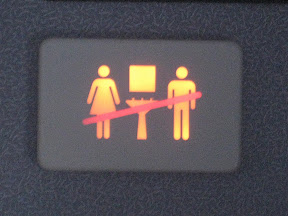 That is all for my October-only-political-series-of-posts. In my alternate universe, where I have time for everything, I would have a second political blog. But in this universe, trying to write about politics and parenting is keeping me up too late at night, so it’s back to Sparkles and Buttercup for me. Stay tuned and I’ll tell you how the girls were dressed in their Halloween princess costumes when we went to a castle to find out if the Beast was there…

This entry was written by Carol, posted on November 1, 2010 at 7:37 am, filed under Mom Stories and tagged jon stewart, politics. Bookmark the permalink. Follow any comments here with the RSS feed for this post. Post a comment or leave a trackback.