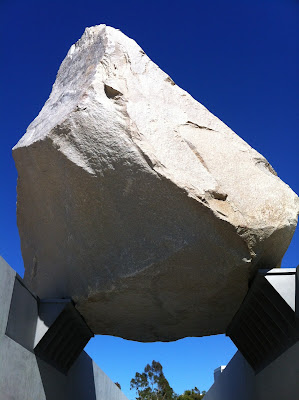 Because I can. Because all is well. Because I have worked hard enough.

That is what brought me to the Los Angeles County Museum of Art (LACMA) last week.

I felt like Wang Lung in The Good Earth, when he recognized that he had worked hard enough on the land so he didn’t have to worry anymore about feeding his family. He could do something just because he wanted to and no practical reason was required.

For Wang Lung, this meant buying his favorite prostitute and setting her up in his house alongside his wife.

Art feels like mankind collectively rejoicing in being and doing something more than we need to survive. And it felt like fate that my company’s office in LA, where I was working for a few days, was very close to LACMA.

Day-to-day life has been harder lately. My new day job is full-time in the office instead of part-time at home. It takes more energy to get work done, in a new industry with new people and new challenges.

At home, we have been eating out a lot lately. Blue Eyes and I have spent entire weekend days on laundry and groceries and picking up the one-hundred-and-fifty things on the floor. Don’t even get me started on the flies coming out of the drain or the cat that pees on the carpet.

Blue Eyes will tell you that I’m a little more on edge than usual.

On Thursday, my work day started at 5:30 AM Austin time and ended at 10:30pm LA time (add 2 hours for the time difference). That was followed by another 5:30am morning to get ready for an important meeting.

After the meeting, later in the afternoon, I realized that I had worked hard enough and I didn’t have to worry anymore. I could do something just because I wanted to and no practical reason was required.

I left the office at 4pm and went to LACMA. The picture above is of Michael Heizer’s Elivated Mass, a new installation that is grand and dramatic. Play the video below (I’m sorry I forgot the title and artist’s name!) to see a smaller, lighter and more interactive piece. I love that it is what it is, but it is also the movement and sounds from the kids swinging their arms and giggling with delight.

If you have worked hard enough too, let us collectively rejoice.

This entry was written by Carol, posted on July 2, 2012 at 9:00 am, filed under Mom Stories and tagged LACMA, Levitated Mass, Los Angeles County Museum of Art, Michael Heizer, The Good Earth, Wang Lung, art, work life balance, working mom. Bookmark the permalink. Follow any comments here with the RSS feed for this post. Post a comment or leave a trackback.