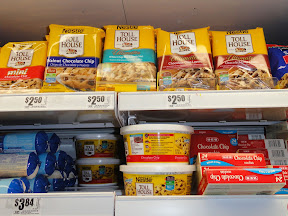 So, I’m checking out the cookie dough at H-E-B. Blue Eyes doesn’t like the girls eating to many sweets, but I like to surprise them with chocolate chip cookies just out of the oven, served with a cold glass of milk. I was considering my options when I was hit hard on my side.

I had never been hit before while shopping for cookies.

He is about eight years old. I don’t know him. He doesn’t look like he knows me. It wasn’t an accident, he had pulled back his arm and smacked me. Now he is smiling and giggling a little.

His Dad asks him to say he is sorry, but the boy stays quiet and keeps smiling. Then his Dad says, in an unconvincing Parent Voice, “Son, I’m going to have to give you a time out.” then he counts to TEN while his son stands there, SMILING the whole time.

I need to take a few deep breaths, give me a minute.

So, I think of myself as someone who doesn’t judge parenting in public. I have opinions about parenting and I’ll share them with whoever asks and maybe I’ll write a book one day, but that is different than judging one kid and one parent about one incident. I don’t know the context, history or challenges that affect the kid or the parent. I don’t think my judgement helps anyone or makes things right.

But, since I just got hit while shopping for cookies…

That was totally creepy! I’m not sure which was creepier, the boy’s random hitting of a stranger, or his detached, unremorseful smile afterwards. And if I was writing a novel about an ineffective parent, I couldn’t think of a better example than giving a ten-second time out for an eight-year-old boy.

Later, my judgement softened into a sadness. Do you know the opening scene in a movie that tells you a lot in a short time about the troubles coming ahead? This felt like one of those scenes for this boy and his Dad.

The Dad asked if I was OK and told me he was sorry. I didn’t say anything else. Not because I didn’t think I should or could, but because I’m not quick on my feet that way. What would you have said or done, if you were hit while shopping for cookies?

This entry was written by Carol, posted on August 10, 2011 at 7:33 pm, filed under Mom Stories and tagged parenting observations. Bookmark the permalink. Follow any comments here with the RSS feed for this post. Post a comment or leave a trackback.