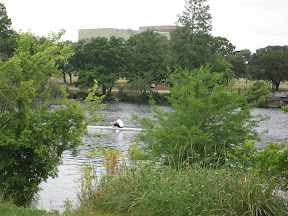 Just then, a man jogging along the lower trail made a hard turn and ran towards Sparkles. He picked her up in his arms and flew into the afternoon sky, his cape billowing in the wind… 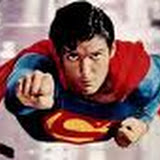 For one thing, it wasn’t Superman, but I think it might have been Kirk Watson, the Texas Senator.

I hadn’t been that worried about Sparkles, she was looking back at me and I know pretty well how far she will go. But it helped to have an extra set of hands too, since the hill was too steep for the wagon and I wanted to be sure the wagon wasn’t going to roll on the trail before I went up the hill to get Sparkles.

So, thanks to Kirk Watson, or his look-alike, for his help at Lady Bird Lake. But that is only half the story.

Sparkles, Buttercup and I were walking in the March of Dimes Walk for Babies on Barbara, Joe and Kate Haller’s team. 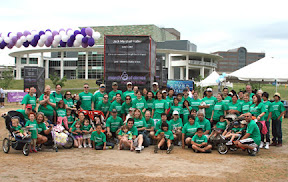 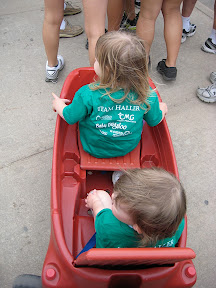 Women have sisters they were born with and sisters they meet later on and Barbara is one of my new sisters. Almost three years ago, we were in Seton hospital at the same time. We had each mourned the death of one of our twin babies, my baby Grace and her baby Jack. We both stayed pregnant with the second twin for a while, but they were both born early. Our baby girls, Sparkles and Kate, were NICU roommates.

Our baby girls will be three-years-old next month. They are both super healthy and happy and amazing. They both benefited from March of Dimes research. It isn’t too late to donate to Team Haller and the March of Dimes!

If you walked in the walk, you might know that the route isn’t along Lady Bird Lake. What, did we get lost? Not really. After the walk crossed Congress Bridge.. 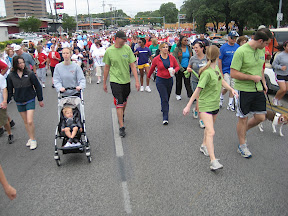 we took a left on purpose. Baby Grace’s ashes are buried at Twin Gardens on Lady Bird Lake. So we took a personally alternate route.

Now it is Sunday night and it has been a pretty good Mother’s Day. There was all the family-hugs-and-kisses part this morning and then a pretty indulgent rest-of-the-day-without-kids-and-with-spending-money for some of my favorite places,  Waterloo, Book People and Emeralds and someplace new, the By Cindy Day Spa. Blue Eyes and my girls took good care of me today.

This entry was written by Carol, posted on May 9, 2010 at 8:51 pm, filed under Mom Stories and tagged kirk watson, lady bird lake, march of dimes. Bookmark the permalink. Follow any comments here with the RSS feed for this post. Post a comment or leave a trackback.