Welcome to Austin’s Tiniest Kids’ calendar with just a few carefully selected activities during the coming week, usually hiking, music or art-related.
This is a July 4th for Kids special edition. Make a July 4th t-shirt on Sunday and check out two options for July 4th fireworks.

Austin Symphony with Fireworks at Lady Bird Lake
Wednesday, July 4th, 8:30pm
701 West Riverside Drive
I usually prefer the less traveled path, but sometimes I appreciate a tradition too and you can’t get much more traditional than classical music and fireworks on July 4th. You can head out early with a picnic and check out the lake, trails and turtles at Butler Park.

Bob Schnieder’s 7th Annual July 4th Festival
Wednesday, July 4th, 5:00pm
12225 W Highway 290
The July 4th festival might have slightly fewer than the 100,000 people expected at Lady Bird Lake, so it might be a bit easier to manage. They have a great lineup of bands, which is why I guess it is $20 a person and they have their own fireworks.

If you find this helpful, I would love if you would share or tweet or leave a comment. If you want to get Austin Kids Recommended! and Growing Up Austin in your inbox, click here. And like always, check out AustinKidsHike.com, AustinKidsDance.com and AustinKidsDraw.com for on-going activities. If you have an idea for a recommendation, send it to carol@growingupaustin.com. Thanks for reading!

Lightning Strikes Twice on a Thursday

Thursday Night Out worked out again last week, in a random kind of way, without a lot of planning, with different people and different kinds of fun all in one night. 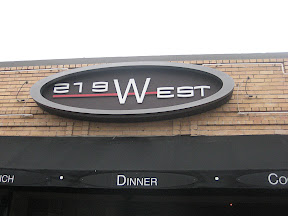 It started downtown at 219 West with a Chocolatini (or two) and the Mini Caprese Burgers. The tomatoes on the burgers were amazing, I imagined that they grew them on a roof-top garden and picked them only when I placed my order, because they tasted so good. The Chocolatinis were tasty too, equally strong and sweet. 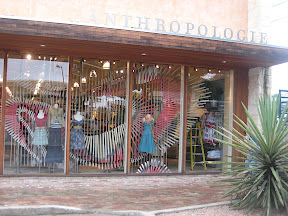 Then on to Anthropologie to do a little shopping. I used to not understand this store, I thought it looked like someone’s laundry basket had exploded, with random colors and textures thrown all about. On this night a found a super cute raincoat, then the Mom in me checked the tag and it was made of linen. But I’m getting used to it and they have some clothes that make some sense, especially in the room in the back with the sale prices. I found a cute shirt and necklace and spent the last of my allowance. 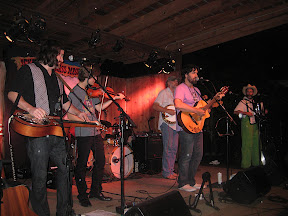 I had to borrow from next week’s allowance to see the Texas Bluegrass Massacre with Bob Schneider at Threadgill’s. This show was the opposite of what happens on the radio. Everybody was hanging out together – the bluegrass, country, folk, blues, rock and a little R&B – and they got along just fine. The people were all different ages, hanging out and dancing, with a lot of free-form twisting-about. Bob Schneider was a comedian in-between songs and there was love in the air, you could feel it for sure when everyone sang the words to a coutry-ish version of Tarantula…

There she goes
There in the moonlight
Under the stars
Tarantula!!!!!

Well, tonight is a week later and Blue Eyes is out of town and I’m at home. Oh, no, maybe my good luck has run out. But I don’t think so, I’m really liking Thursday Night Out and I’m just resting up for next week. I’ll let you know how it goes.