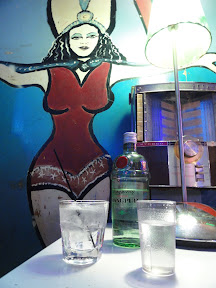 Do you ever do something just because you haven’t ever done it before? I was hanging out at The Carousel Lounge with my girlfriend the other night and I tried to order a Gin and Tonic and the waitress said they didn’t have hard liquor, but she could get me a setup.

Oh, my, I haven’t ever brought my own gin to a bar before. It sounded interesting. And it wasn’t like I would be robbing a bank, it was even legal, I was pretty sure.

So, my girlfriend and I went back a week later, with a bottle of gin in hand and we each bought a $2 setup with a $1 tip.

I didn’t even know what came in a setup. Well, now I know, it is a glass of ice and a smaller glass of tonic or soda. This is enough for two and a half drinks, which is more drinks than my girlfriend and I drink, so we were set for the night.

The decor was circus themed, with a giant pink elephant and a nostalgic, red English phone booth. Brian Kremer and Run of the Mill played live music on a small stage. The women’s bathroom was hidden behind the stage and I had to step over amps and microphone cords to get there. There was one waitress named Helen, who was older and very sweet to us, taking care of us, like our Moms might, if they were waitresses at the Carousel Lounge.

But, I was thinking, how does this setup idea work with the open container law? Do we have to finish my bottle of gin? No, that can’t be right. I will certainly have an open bottle of gin at the end of the night. Hmmm…

Well, let me tell you the answer, because I found the answer on the Internet the next day, you can have an open container in a locked glove box or the trunk. Good to know.

That is my whole story and it isn’t even about my girls or being a Mom, except that I think it helps to have stories that aren’t about your girls when you are so busy being a Mom, because it makes it easier to be a Mom, when the girls wake you up the next morning, to do it all over again. Thanks to my girlfriend, Helen, Brian Kremer and Run of the Mill. It was a fun night.