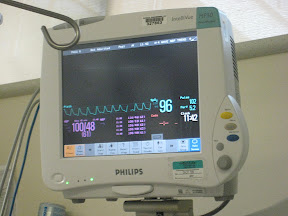 (If I’m going to use this picture, I need to start with the title “Everyone Is OK.”)

Dr. Park, the anesthesiologist, introduced himself. Blue Eyes said, “No need for introductions, we know you from two months ago when one of our other daughters had surgery“.

I don’t want to know this guy.

Noel, our thirteen-year-old, woke up on Saturday night with a pain in her side and by morning she was having her appendix out at Dell Children’s Hospital. She is home now and doing well.

(You might think I’m making this up about having a thirteen-year-old, because I don’t write about her. But she is thirteen and on-line and I let her have her own on-line experience without her Step-Mom writing about her, but every now and then, I write a little something, like you won’t believe this fight we had the other day… just kidding…)

On Sunday night, I went to bed early, my body was tired and my soul was tired, a kind of tired a parent gets when they have been getting things done and taking care of the family, but worrying about their kid at the same time.

Nothing personal, Dr. Park, but I hope we don’t meet again for a very, very long time, at least long enough for me to not remember you and hopefully when all my kids are grown and we aren’t anywhere near a hospital, maybe on a cruise ship or playing bingo in a retirement community.

For now, my tired soul is also a thankful soul, thankful that everyone is OK. 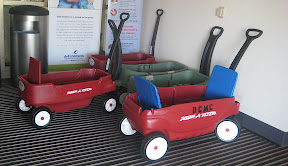 (All our kids are doing great! I have to say that, even though it tells the ending at the beginning, but my family wouldn’t appreciate the suspense!)

Do you ever feel deeply grateful and very worried at the same time about the same thing?

Last month, Sparkles had an emergency room visit (thank you, Dell Children’s, for the wagons!), followed later in the week with minor surgery and wound care, because of a sore that got infected.

When we were in the emergency room, three kids came in from a car accident and doctors and nurses rushed about, in that urgent kind of way. Being in the emergency room brings to mind all kinds of reasons why a child might be there and I knew Sparkles’ situation was temporary and not serious. I was grateful to have such healthy girls.

In the surgeon’s office later in the week, the surgeon explained how Sparkles would be put under, all the way under, completely asleep, so the sore could be drained. Maybe this was the most minor surgery out of all surgeries, maybe the surgeon could have done it his first day after college graduation, after a few beers, but there is something unnerving about any kind of surgery for your baby girl. I worried. I wanted to hold her all day long, even during the surgery, which is apparently against the rules.

All is well now. The wound has healed and we are back to a regular routine. That is just part of the parenting journey I think, the ebb and flow of gratefulness and worry, hopefully being grateful more of the time.  I’m grateful for the wagons, the doctors, the Grandparents and most of all for Sparkles, who was tough-as-nails, pulling off the gauze and tape by herself by the end. Today is a day to be grateful. Amen.