It Slipped Through When I Wasn’t Careful 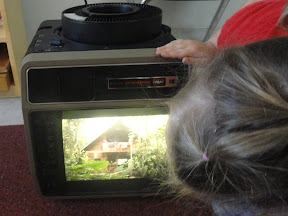 I have been for a while.

I have too many hobbies and I’m not allowed to have any more and I cannot, under any circumstances, sign up for anything new.

But I have a condition. There should be a name for it. Things tend to slip through when I’m not careful.

Sparkles took me aside the other day when I picked her up from day care. I knelt down beside her. She whispered her story. She said that sometimes parents come to the day care to talk about a country they have visited. She said that the parent gets to tell her story from the front of the room. And, this is the important part, the child gets to sit right next to her parent, also at the front of the room.

She asked if maybe I wanted to do that.

It slipped through when I wasn’t careful.

In one week, I had a business project due, I performed in the Maternal Instincts Project and I launched Austin Kids Dance! I was nearly in a coma by the end. But I had to stay conscious a little bit longer. My presentation about Ecuador was just a few days away.

I traveled a lot in my twenties. I have a scrapbook for every trip. I found them all. Except Ecuador. Ecuador was the one of the few countries I have been to twice, but I had nothing to show.

My brother would have something, though. He lived in Ecuador when he was in the Peace Corps and he lives in Austin now. No problem.

I went to his apartment and looked through his pictures.

I love my brother.

But he has a several hundred pictures of random areas of leafy, green vegetation and tree limbs, with a small bit of moss in the middle, of different colors, but mostly shades of brown.

I was starting to get worried.

“But you have slides, right?” I asked.

“Not really. The projector probably doesn’t work anymore” he said.

He looked and then we fiddled and messed and fidgeted.

The projector worked. I knew I had it made. It almost didn’t matter what kind of slides he had, this projector was so cool!

Sparkles and other kids her age have never seen slides before. I could tell them it was the latest technology! When you closed the lens cover on this projector, the image was projected on a small TV-like screen. So, it was like you had your own TV that you created the pictures for yourself. OK, maybe you can do that on an old-fashioned PC too, but this looked cool because it was so different. It even had a cassette player on the side so you could make a true multi-media presentation. Wow.

I found enough slides of flowers and butterflies that had some color.

The kids LOVED the slides.

The last slide was of the tree house where my brother lived. The kids LOVED the idea of living in a tree house and they had TONS of questions. (Did it have a bed? Where did he go to the bathroom? Where was his Mommy?)

I told them about the train ride I took with my brother when we bought the cheap tickets and rode on the top of the train as it went through a mountain range, down to the coast. About how we could see the beautiful mountains all around us in every direction and how we rode through the clouds and how it was a little scary going through the pitch black tunnels. And how when the train broke down, one of the engineers climbed up the side of the mountain we were on, then climbed a telephone pole to connect to a radio to call for help. We played cards on top of the train for hours while we waited, having a great time.

A week or so later, I found the picture of me standing on the top of the train before it left the station, super early in the morning, when it was super cold. I didn’t have warm clothes, so I layered everything I had, with black leggings under my overall shorts, the super-big sweater my brother had bought me and a shirt on my head, with the sleeves tied under my chin, like a poor man’s hat. 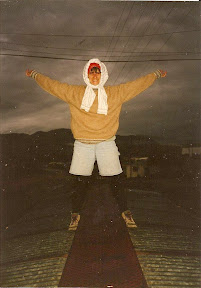 I survived that ride on top of a train and I survived that week as a Mom/project manager/writer. I’ve slept in a few mornings since then. I’m recovering nicely.

Until the next time I let something slip through when I’m not careful.