Dinner at The Ramsey Diner+Drive-in 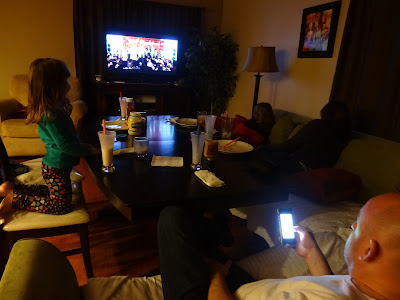 As Blue Eyes, Noel, Sparkles and Buttercup walked in the front door of our house, I said, “Hello. Welcome to The Ramsey Diner. How many in your party?”

They hesitated and looked around.

I sat them at the first booth, well, the only booth. I had moved our kitchen table into the living room, with the couch serving as part of the booth and chairs on the other side. Silverware was wrapped in napkins at each place setting. Then, to compliment the diner theme, I added a bit of a drive-in, with the TV on and ready-to-go. The movie was Grease, a family favorite.

As everyone sat down, I pulled out my waitress pad and a pen. “What would y’all like to drink?”

This was the first ever night at The Ramsey Diner + Drive-in. We needed a win, as a family. We had more challenges than usual, more worries, more lost sleep. We needed to have fun.

I brought out the drinks on a round pizza tray, a risky move for any waitress, especially for an inexperienced and clumsy one.

Then I took orders for plain, traditional or blue cheese and bacon burgers. Buttercup was the last one to give her order. Then I asked her, “Would you like fries with that?”

We never make fries at the house. I don’t know why, we just don’t. So I might as well have said, “Would you like a huge bowl of ice cream in instead of green peas,” because all three girls definitely wanted fries with that.

They watched the movie and sang-along while I made the burgers and fries. I carried out their plates, on my arm, like a real waitress, yet another risky move. Then we ate together while we watched Sandy and Danny struggle with their relationship at Rydell High. It might have seemed like we were just watching TV, except we sang along together and we did our own dancing. (I don’t know what to say about the evidence captured in the photo about someone on their iPhone. I’m sure he was answering and emergency text of some kind that I don’t remember. Speaking of technology, would someone please teach me how to use a camera? My cat could take a better picture.)

After we were done eating, I whispered to Blue Eyes if he thought the next surprise would be OK. He doesn’t like sugar or dairy for the girls, especially in the evening. But, how can you have dinner at a diner without milkshakes? He smiled and gave the thumbs up. The strawberry milkshakes were delicious.

(One note – what is up with that movie, Grease, anyway? It looks and feels like so much family fun, with all that super fun singing and dancing. But the message seems to be that everyone should be willing to compromise for their girlfriend/boyfriend, but only the girls really have to and if a girl wants to have fun and please her guy, she had better put out.  And then they sing about, “we stayed up until 10 o’clock,” like that is a big deal, so it leaves me confused. This movie will lead to teaching moments as the girls get older, that is for sure.)

The night didn’t fix anything, but it helped anyway, to relax and have fun. Now maybe we’ll be more ready for all the rest, when the morning comes.

Everything I Ever Wanted, Including Grease and Mary Poppins

I remember seeing a local beauty pageant on TV when I was a kid. During the interview round, the MC asked a contestant, “If you won a million dollars, what would you do?” She smiled and looked genuinely surprised and happy, as if maybe it had really happened. Then she said “Oh, my! I would buy everything I ever wanted!” 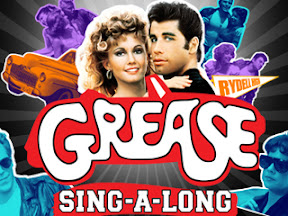 It was around the same time, when I was ten or so, when Mary Poppins played on TV. I didn’t see it, but the day after, I heard every single kid in the whole fifth grade sing “A Spoonful of Sugar” all day long. It sounded like the greatest song that I had ever heard. And I was crushed. I was so sad that I missed the movie on TV. I thought I had missed my chance for my whole life, that there would never be another time to see the movie and I would never know what the song was about or get to see the actors sing it.

So, back to the Alamo last week. I thought about how AMAZING the world is now. How I can see the movie or hear the soundtrack for Grease or Mary Poppins or any other random movie I might thing of – on my TV, computer or phone – at home, work, an airport or a coffee shop, for not much money at all.  I feel like I am living the beauty contestant’s dream, because when it comes to movies and music, I have everything I’ve ever wanted.

I know that about a week from now, I will take this for granted and it will just seem normal. But for now, I’m going to smile, be surprised and happy, and really, really enjoy having everything I’ve ever wanted.

Oh, and one more note, a few folks have asked about the Grease Sing-a-long when I wrote about it a few days ago. The Alamo Drafthouse on South Lamar is playing it again July 8 – 17th. Some of the shows are sold out already, so you might want to get tickets ahead of time here.