SXSW for Kids 2013 Sucked and Rocked, So I Guess I Broke Even

Ah, SXSW for Kids 2013. I recommended eleven fun SXSW things for parents and kids to do together in a post last week. I was really looking forward to this! 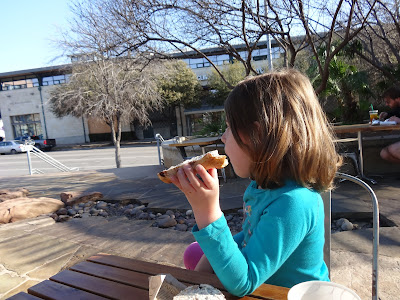 Here is Sparkles and I enjoying a breakfast taco at KGSR’s morning broadcasts on Wednesday. Hey, wait a minute! That looks like a bagel and the patio at Whole Foods on 6th street. Well, that is where we went instead, when every parking space within a mile of the W. hotel was taken. 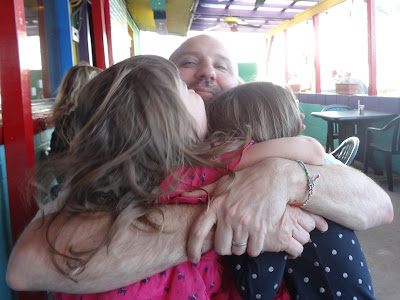 Here is Blue Eyes, Sparkles and Buttercup at Roky Erickson’s Ice Cream Social at Threadgill’s. Hey, wait a minute! That looks a lot like the patio at El Mercado on North Burnet. Well, that is where we went instead, when every parking space within a mile of Threadgill’s was taken. When we made the call to give up on this one, Sparkles started crying about missing the ice cream. I told her we could get some ice cream somewhere else. Then she cried some more, about missing the puppet show. What puppet show? Ohhhh, she heard us say that the Meat Puppets were playing at Threadgill’s. No, we explained, they are a different kind of puppet. 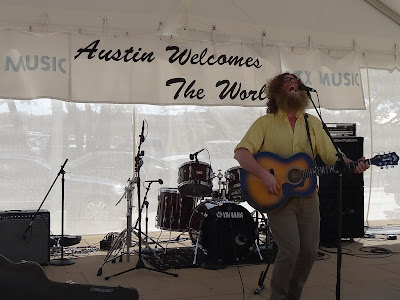 Did we manage to make it anywhere? Sparkles, Buttercup, a friend and I made it to Austin City Hall on Thursday afternoon. The City Hall Plaza setup had lots of room to dance and shaded places to sit. There was even room for the girls to practice cartwheels. After some tunes, we went into City Hall and saw The People’s Gallery, with an exhibit of local artists. Beatrice Baldwin’s were my favorites. Her pieces were colorful, with interesting textures, physicality and themes. We went back outside to hear Ben Caplan, who had a lot of energy and a big, compelling voice. But the space wasn’t contained and it was surrounded by traffic on three sides. I had to keep a careful watch, so I couldn’t really listen to the music. And even though we had a drop-off and pick-up ride, the traffic was a lot to handle. Overall, given the ratio of effort and fun, I figure I broke even. 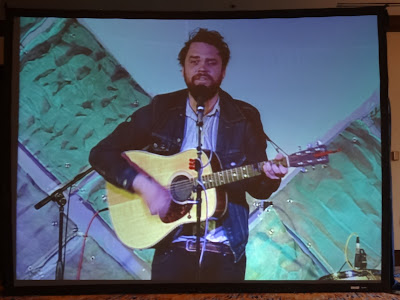 Sparkles and I made it to KUTX’s broadcasts on Friday. The parking lot was full, but the valet service was still available for $10, then it cost $20 to get in. We heard the last song of Dana Falconberry’s set and then a few songs from Frightened Rabbit. We watched the TV in a side room instead of the live show, because it was too crowded. Then Sparkles didn’t last. It’s a risk when I see live music with my kids, sometimes they get nutty and sometimes we have to leave. I paid $30 all together for 3 songs, at $10 per song. Well, Dana’s song was pretty darn good, so I figure I broke even again.

But, breaking even isn’t something to write home about, or write a blog post about, especially when the post recommends that other people bring their kids to SXSW too. As of Friday night, I told Blue Eyes that everything SXSW my blog had to come down, because SXSW is too big now. Justin Timberlake AND Prince? WTF? What happened to our sweet little festival where unknown bands dreamed of getting their first record deal? I volunteered at SXSW twenty-something years ago when ZZ Top performed. It was the first SXSW performance by an already-signed, already-famous band and people said it then – the spirit of the festival would be crushed if it became just another place for big bands to play.

I don’t know if all that has happened, but this year, it feels like it has gotten so big that it doesn’t make as much sense for people who aren’t conference attendees or who don’t live or work downtown. It’s especially iffy for families with kids, when the crazy logistics are even harder to manage.

Blue Eyes, Sparkles, Buttercup and I got to South Congress about 11:00 and there was space in the parking garage behind Guero’s and Hopdaddy, free for 2 hours, but $30 if you are late. The parking spot was so pretty, I took a picture of it. 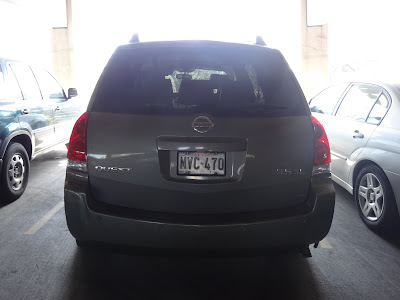 We had 2 hours to have fun and NOT be late. We ate lunch at Hopdaddy, where amazingly enough, the line wasn’t long yet, then caught Tyburn Jig on Guero’s patio.

I love to watch the girls dance. The weather was perfect. The margarita was sweet. I don’t know whose idea this was, but we ended up at Amy’s across the street to get ice cream cones, then headed back to the music.

As we were heading out to meet our parking deadline, Blue Eyes leaned over to me and whispered three sweet words in my ear, “You wanna stay?”

He got the car and brought the kids to Great Grandma’s. I started making the rounds – Guero’s, San Jose Hotel, Snack Bar, Continental Club, Freebird’s. The sets were short, so when one ended, I moved on to another. Sometimes the venues were close enough that I could hear more than one band at the same time, and head to the one that drew me more.  I didn’t need to research the bands or make a schedule, I just listened and wandered about and I heard great things. Here are a few of my favorites… 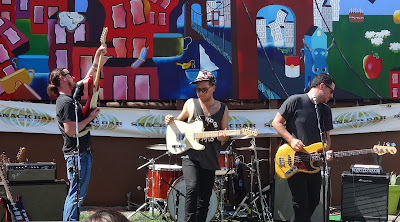 Don’t Know for Sure, and that isn’t the name of the band, it’s that I don’t really know, even though I really liked them. According to the schedule, it is What Made Milwaukee Famous, but these guys don’t look like the Google images for that band, so I don’t really know. Do you know?

Then, after quick nap and dinner at home, the girls and I went to see one more show, in the neighborhood, really low-key, with easy parking. We caught a few songs by Meg Barnhouse and Kiya Heartwood at BookWoman. It was a sweet end to a delicious day. 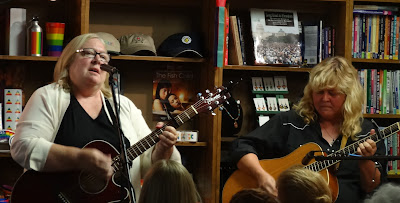 Saturday was everything I’ve ever wanted SXSW to be, busy-Mom-with-kids style. So, which is it, did SXSW with Kids 2013 SUCK or ROCK? Both. Next year, I’ll recommend less with kids and I’ll do less with my own kids. I’ll get there earlier and take the train more. But I won’t give up on it all together either. I’ll be back next year, hoping to do better than breaking even. See y’all then.

We just needed to get out of the house. It wasn’t going well with the little girls.

Sometimes a day will have a personality of its own and sometimes it’s a sad and grumpy one. Sometimes it helps to get in the car and go somewhere, just to break any patterns that have taken hold. Sometimes we are all in the car and on the road before we even know where we are going.

On a recent Saturday afternoon, we ended up at the Austin Children’s Museum. They have a cool exhibit there now with a hundred different things you can do with ping pong balls. The girls liked that, but they loved the old standards too, the kitchen, the train and the art room where they get to cut with real scissors. Sometimes I think all the museum needs to have is real scissors and they would be happy.

It was about 5:00 and we didn’t have a of food at home for dinner, but the cool thing about downtown is that Guero’s is downtown. There wasn’t a wait, the shrimp fajitas were very yummy and their house margarita is my favorite of all time.

After that, Sparkles and Blue Eyes went to Amy’s Ice Creams for dessert. Buttercup didn’t eat a good dinner, so no Amy’s for her, we went walking around instead. Here we are trying on boots at Allen’s Boots. SO CUTE! These may not be very practical, but her birthday is coming up… 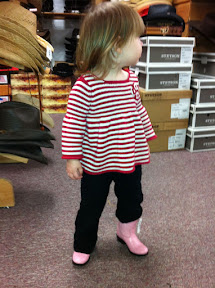 Well, it that wasn’t enough, we met back up at Guerro’s to go home, but there was live music at Guerro’s Garden Stage.

The only thing is that no one was dancing. Everyone was listening quietly and politely from their picnic table benches. I just don’t get that.

Sparkles and I ran to the front of the stage and started dancing.

Running in circles, arms high in the air, lots of twirls.

Then Sparkles asked some other kids to dance, then some of their parents danced too. Buttercup got into it and after a while, the dance floor was full of Crazy Kid Dancing. 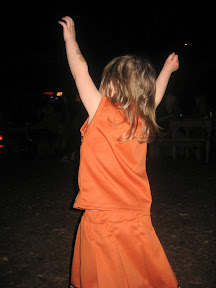 The band was Bonneville County Pine Box, they were country, bluegrass and/or pop. They were pretty fun. 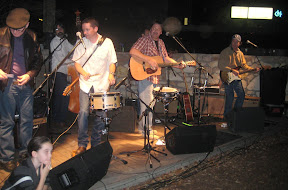 I checked out the schedule for Guerro’s Garden Stage. They have shows at 6:30 on Thursday, Friday and Saturdays and at 3:00pm on Sunday afternoons. These are great times for kids. We will definitely be back!

The day’s personality had definitely changed for the better. I think the change of scenery helped everyone and it’s hard to be sad and grumpy when you are Crazy Kid Dancing.  Thanks Buttercup, Sparkles and Blue Eyes. Thanks Bonneville County Pine Box. Thanks, Austin, Texas.

Oh, and I have a new idea. For a limited time, when I write about local Austin businesses, if you leave a comment, you will be entered to win a Go Local card that gets you great discounts around town. Enter before Friday, February 11th, one comment per person. Yeah!