The Smart Girls at the Party Discover What Happiness Looks Like 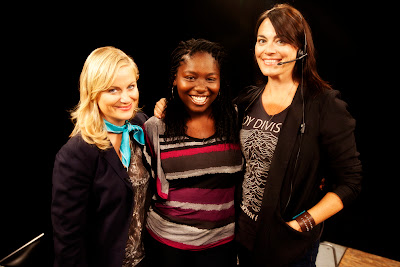 In my last post, I explained the events and thoughts leading up to my interview with Meredith Walker, co-creator of the Smart Girls at the Party YouTube channel, with Amy Poehler. The picture above is Amy, Kayla and Meredith; Kayla was interviewed for Smart Girls. Here is my interview, more or less.

I had two feelings going into the interview: A) The Smart Girls at the Party might be something really special that could have a significant positive impact on girls and B) This is another self-help story that sounds and feels good, but when you look closer, can be reduced to familiar superficial platitudes.

Meredith got my attention when she said this just a few minutes into the interview:

“I find that platitudes don’t get understood or heard.  … It sounds great to say “Be yourself,” but how do you wake up and say, “Hey, I want to be myself today, at breakfast!”  How do you do it? I think having a conversation about that and showing good examples and being more specific, that helps for me.”

She had my interest. But, right about this time in the interview is where I started talking too much and the interview broke down into a rambling conversation without a logical progression of questions and answers, which are typically required for an interview post. Because I’m a blogger and not a journalist and I don’t know all the rules, I re-imagined our interview, with Meredith’s OK, as if I had been smart in real-time. In my mind, it went something like this…

(To be honest, that was her joke and I stole it.)

[Carol] Meredith, can you share some specific examples about how to ‘be yourself?’

[Meredith] We’ve talked to a lot of young girls who try new things and are willing to look silly while they learn. They don’t always follow the most obvious, cookie-cutter path and they make their own way without worrying to much about what people think.

[Carol]  You said that the girls you interview for Smart Girls are both ordinary and unique. Isn’t that the same as saying everyone is special?

[Meredith] But that way of thinking is far too narrow.  It doesn’t bring into the discussion the value that each person can have for the good of the community. The old saying about taking a village may be trite but still rings true.  We need the contribution of each other, not just those whose achievements are easily recognized.  I think it’s cynical to separate the world into winners and losers based on supposed achievement. Sure, the world needs heroes.  But, the supposedly smallest contribution, offered authentically, can make a world of difference.  And I think that is heroic too.

[Meredith] Happiness is ordinary. There are no bright lights or sound tracks. It isn’t rich or famous. It is quiet and simple and ordinary and there is enough of it for everyone. Also, it isn’t a list of facts to memorize or tasks to complete. It is an idea and a feeling that takes practice and patience and acceptance.

(Cue fuzzy, dream-like special effects to bring us back to reality…)

It took a while for it to all sink in. I was convinced. Smart Girls at the Party really is something special. I thought about quitting my day job so I could intern with Smart Girls for free and then my teenager could work instead of going to college in a few years. But I thought again about what I had learned. Happiness is in the ordinary. It is with my family, in our house, eating fish and broccoli for dinner. It is getting to write after the kids are in bed. It is our camping trip coming up soon.

If you know any girls or Moms or Dads with girls (or boys or adults) who might appreciate the Smart Girls at the Party story, please share their link with them, with this post or any other way. Smart Girls aren’t flashy or gimmicky, there are no Rock-n-Roll tours or Super Bowl ads, but I feel like every girl in the world should know about it, in case it might be something that speaks to them.

Also, Meredith Walker is speaking as part of the Young Women’s Program at the Texas Conference for Women in Austin next Wednesday on October 24th. This program is intended for Juniors and Seniors in High School and registration for students is just $75, with a student ID. Kids are in classrooms most of the year, the conference could be a different type of learning. (The conference folks can even help with a school excuse!) Spread the word if you know someone who would enjoy this!