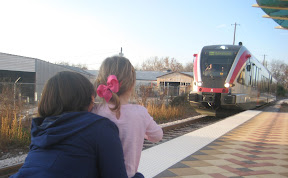 This train stopped at the station and Sparkles stepped across the white line, into the open door of the car. It was like stepping into a movie or story book, like Harry’s first time getting on board the Hogwart’s Express. He eyes were wide open, she noticed everything and asked about everything and it was magic.

Noel, Sparkles, Buttercup, Blue Eyes and I took Austin’s light rail from Crestview station to downtown late one afternoon. We walked around downtown, checked out the super tall buildings, saw the Capital from a distance and watched all the different kinds of people out and about. We ate some old fashioned burgers at Hut’s hamburgers and nearly ran out of time to catch the last train back home.

But, luckily, we were downtown and they have a cab or two hanging out around there so we called for one to take us back to the train station. The cab was almost as exciting as the train, because Sparkles and Buttercup didn’t have to be in car seats and they might as well have been on a, well, TRAIN, they were so excited to be free of the buckles.

It was fun to find adventure in everyday things. We’ll definitely be going back to Hogart’s soon.