It is Not Possible To Get More Lost, Part 2

(Welcome to a special series on GrowingUpAustin.com, A Lithuanian Story – All the Way From Texas. I am traveling to Lithuania this summer to teach storytelling at A.P.P.L.E., an education conference that I first taught at almost twenty years ago. The new conference is fully of mystery and adventure. The first conference gave me stories I have been telling ever since. So, I decided to write about the trips here. If you have just joined, here is a summary of the posts. I’ll return to writing about hiking, live music and art for Austin kids when I get back in July. Information is always available at AustinKidsHike.com (hiking), AustinKidsDance.com (live music) and AustinKidsDraw.com (art).) I wrote recently about getting lost in Lithuania as soon as I arrived. Here is what happened next.

In one last ditch, completely crazy attempt to not sleep on the airport bench that night, I walked up to the information desk and asked a young lady with a friendly face and askede, “Do you speak English?”

Then I asked a far more difficult question, “I’m with APPLE and I can’t find my ride. Can you help me?”

This was feeling more like Harry Potter’s spells and magic all the time.

Drivers with APPLE had been coming to the airport a few times a day for a few days in a row and the lady at the information desk had been helping the drivers connect with passengers. Her seemingly magical knowledge was also a result of being in a much smaller country with one International airport that had one gate and one baggage claim that didn’t even need numbers. It made it easier to find what you were looking for, some of the time anyway.

My driver was picking up someone else at 2:00, but he was glad to see me. APPLE had incorrect flight information for me, so they had tried to pick my up the day before.  And, yes, he knew where the bank was where I could get money, several people in the group would be going later in the day. And after the bank, I would have a hot dinner  and a comfortable bed at night. The next day, I would have a ride to the city where I would be teaching, which I learned was Kedainiai.

I made a promise to myself to always have an address with me when I traveled. I was sure it would be a very, very, very long time before I made the same mistake again and got so lost that I didn’t know where I would sleep. It would most certainly happen again in Lithuania, for heaven’s sake… right?

By Carol | Posted in A Lithuanian Story | Comments (0)

It Is Not Possible to Get More Lost, Part 1

(Welcome to a special series on GrowingUpAustin.com, A Lithuanian Story – All the Way From Texas. I am traveling to Lithuania this summer to teach storytelling at A.P.P.L.E., an education conference that I first taught at almost twenty years ago. The new conference is fully of mystery and adventure. The first conference gave me stories I have been telling ever since. So, I decided to write about the trips here. If you have just joined, here is a summary of the posts. I’ll return to writing about hiking, live music and art for Austin kids when I get back in July. Information is always available at AustinKidsHike.com (hiking), AustinKidsDance.com (live music) and AustinKidsDraw.com (art).) 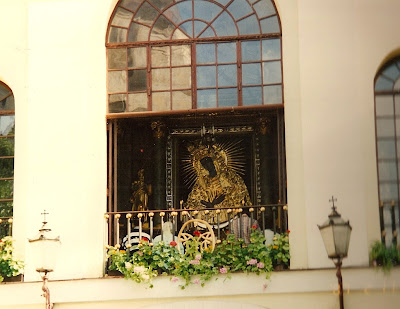 It was my first trip to Lithuania, in 1995. I had been in the country for five minutes when I got lost in the country. I knew I was in the right country, but we were just meeting in Vilnus and I didn’t even know the city where I would be teaching. I also didn’t have any money. I would probably have to sleep on this airport bench tonight and maybe forever.

I backpacked Western Europe for five weeks first, then I arrived at the Berlin airport for my flight to Lithuania. My boarding pass said my gate number was 14 1/2.

This was before Harry Potter. But when I saw Harry Potter catch the train to Hogwarts for the first time, it felt oddly familiar.

I arrived between gates 14 and 15 early and there was no gate 14 1/2. A nearby gate agent said I just needed to believe, and walk on through the brick wall. Just kidding. She said to wait and it would appear, and it did.

A woman in an airline uniform pushed a lightweight podium on a dolly, she set it down between gates 14 and 15, then she put the dolly off to the side. She picked up a clipboard and a pen off the podium and she motioned for a few of us who looked like we were looking for a gate to come her way.

My flight from Berlin to Lithuania was on Air Lithuania, an airline I knew nothing about, run by a country I knew nothing about. Airlines were supposed to have lots of permanent gates and big airplanes and many huge mainframe computers to manage the operations of complex and modern aircraft. So, at least I wanted to know if the printout on her clipboard was from a computer printer instead of a typewriter or, even worse, a pen.

I couldn’t get a good look and I decided I didn’t want to know. I would get on the plane either way.

After the ten or fifteen of us were checked off on a list, the gate agent moved the podium to the side with the dolly. Then she lead us through a security door, down a set of stairs and onto the tarmac.

She lead us onto a bus and the bus took us a long way, past the big runways, to the very edge of the airport property. As we got off the bus, I saw an especially tiny plane.

The plane sat low to the ground, so when the door was opened at the tail of the plane, the top of the door reached the ground. There were steps on the inside of the door and we climbed inside. The gate agent followed us. She was also our flight attendant. Wait a second, is that guy that just put on the captain’s hat our bus driver? Uh, maybe not, but I think the flight attendant was our co-pilot, either that or there was no co-pilot.

With equal conviction, I also thought, GOD DAMN IT, WHY DO I DO THINGS LIKE THIS? I COULD BE ON A BEACH IN FRANCE, SOAKING IN THE SUNSHINE THEN HAVING A RELAXING DINNER IN THE HOSTEL COURTYARD WITH PIZZA AND A WHOLE BOTTLE OF WINE. WHY WOULD I VOLUNTARILY GO SOMEWHERE WHERE I KNOW ABSOLUTELY NOTHING!?!?!?!?!?!?

It was amazing how little I knew about what would come next. I only knew that someone from APPLE would meet me at the airport.

Ha, I thought, in that way that happens when you are a bit nervous already, what if they didn’t show up? Ha, ha, ha. That would be funny. Because I didn’t have any information at all about the conference with me. Just my contact’s number in the US, but she was already in Lithuania. I wasn’t a complete idiot. I had prepared lessons and I had mailed materials and professional clothes ahead of time, evidence that I had the Vilnius address at one point. I knew how to be prepared, but I just plain forgot to bring the address with me. Ha, that would be funny, if they didn’t show up. Well, there as no reason to worry about that, something that would never happen. Ha. Ha.

I would have been way more nervous if I knew at the time that I also didn’t have any money. I thought I had money, because I went to the money exchange place to get Lithuanian money, but they misheard me and they gave me Hungarian money. I had US money and a credit card, but at that time in Lithuania, no one took credit cards and there was only one bank in the country that could exchange money or do a cash advance on a credit card and this bank was not at the airport.

And whatever answer I came up with, I would have to communicate it in creative hand gestures, because I had been told that very few people in Lithuania spoke English. The conference used interpreters to translate between English and Lithuanian.

I sat down with my coffee in the cafe of the Vilnus airport. The man working the cash register let me have it for free, when he saw me realize that I had multiple forms of completely useless money. I started to think about what my next step would be, but I couldn’t think of even one possible thing…

(Stay tuned for the second half of this story coming soon…)

By Carol | Posted in A Lithuanian Story | Comments (4)