Thank You Steve, the Improv Dog 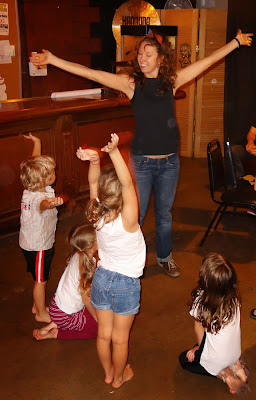 After getting the school year started for Sparkles (1st grade) and Buttercup (Pre-K), I was especially excited to see Steve, the improv dog. After the errands, forms, shopping and early morning wake-ups, I needed Steve to make me laugh.

Have you ever seen 5 and 6-year-olds play t-ball? When Noel played, there wasn’t much baseball going on. Mostly, the kids were learning to wait their turn to bat or learning where to stand on the field. Noel was learning how to stay focused on the batter, so she wouldn’t get hit by the ball. Most of the coaching wasn’t about offense or defense, it was about how to contain yourself and play by the rules. Elementary school was more of the same, training the kids to be orderly and quiet and compliant.

I’m OK with that.

Because this prepares them for the real world. When my kids get jobs one day, they need to know how not to do cartwheels in the office, cut in line for coffee or hit their boss with their teddy bear.  They need to be able to sit through a boring meeting, do work they don’t really want to do and, once again, play by the rules.

But I don’t want ONLY that.

I want them also to run around in circles, make funny faces and say their crazy ideas out loud. I want the boundaries and structure to loosen up so they can be creative and spontaneous. I want them to enter the space where the rules don’t exist yet and have them figure out what should happen next.

That is why I need Steve. He is a dog. He is also the star of “What’s the Story, Steve?”, a production of Move Your Tale. Move Your Tale is an improv troupe directed by Kristin Henn, made of several adults and one dog. They do classes, camps and shows for kids and adults. The Saturday morning version of “What’s Your Story, Steve?” is just for kids and the kids get to make suggestions and join the performers on stage. Steve performs during the show, with the help of an off-stage translator. You can stay after the show for an all-ages improv class or you can take an age-specific improv classes during the week.

I know. Improv has its rules too. But when I tried to get a picture of my girls during the all-ages class, it was nearly impossible. They were running in circles, making funny faces and saying their crazy ideas out loud. It felt like the opposite of sitting in a desk in a neat row looking straight ahead. The rules were more relaxed and they got to be creative and spontaneous.

Most Saturday mornings at 10:00am, check the “What’s Your Story, Steve” link above to verify before you head out.