Stories Are Different at The Moth in New York City

Last month, I was visiting a friend and we went to The Moth Story Slam, an open mike where people tell true personal stories without notes.

The only thing is that I LOVE the Moth and I would MARRY The Moth if I wasn’t already married.

The only other thing is that my friend doesn’t live in Austin, she lives in NEW YORK CITY.

The final thing is that I PUT MY NAME IN THE HAT TO TELL MY STORY AT THE MOTH IN NEW YORK CITY.

Just so you know, I’ve told stories before, this wouldn’t be my first time.

Just so you know, stories are different at The Moth in New York City.

These story tellers were famous. Well, I didn’t know for sure that they were famous, they just seemed famous. They were comfortable on stage and their voices filled the room. These voices had international accents and an unusual number of stories took place in Paris.

The last story teller was tall and handsome, with dark curly hair to his shoulders. He was half French and half Israeli, which made for an especially beautiful accent. He lived in LA, where he was a PhD scientist and he had friends in the film industry, which was how he ended up on the phone with the movie actress who was his crush.

Just like I said, stories are different at The Moth in New York City.

Each time the MC pulled a name from the hat, I had two equally powerful feelings…

“I don’t know what I’m doing here in NEW YORK CITY, please get me back home to KANSAS, I mean TEXAS.”

“PLEASE CALL MY NAME, I came all the way from TEXAS to tell MY STORY.”

There were fifteen names in the hat.

They didn’t call mine.

But, they did let the other five folks tell the first line of their story. Here is mine. I hope you like it. Maybe I will tell the whole story in Austin one day. And, stay tuned for how this New York City experience totally changed my performance at the Maternal Instincts Project a few weeks later.

If you love stories too, The Moth will be in Austin in December with a performance instead of an open mike. Definitely famous people will tell stories about the theme “On The Road” and I will definitely be there.

My Animal Brain in New York 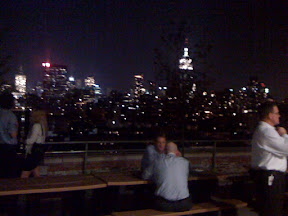 I was in New York on a downtown balcony at a networking event, talking to Clara, who is also a Mom and a writer. It was a beautiful night. Blue Eyes and I were on our first trip without our young girls, the people were interesting and there was an open bar. It was all good, but now and then I looked over my shoulder, looking for my kids to be sure they were all right. I told Clara this, that I was having a great time, but I couldn’t stop looking over my shoulder.

She was so right.

Somewhere in the animal part of my brain, I’m wired to protect my kids and if they were here, the balcony eight floors up would make me nervous and I would make sure they weren’t playing too close. My looking over my shoulder was always in the direction of the balcony.

I networked with writers and publishers with good stories and ideas, but the networking with Moms was the best.