Don’t Panic!!!! You Will Figure Out Where To Go Next 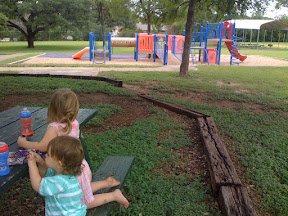 It was 3:16 and I had just picked up my girls from day care. They were in their car seats, I was at the wheel of the minivan and I didn’t know where to go next.  I felt a sudden panic wash over me.

Our afternoons work better when we have a plan, like a play date or errands or a visit with their grandparents. But our play date fell through and it was raining outside and I was out of ideas.

I told myself, Don’t Panic. If I let the Panic take hold, my brain would get busy with the Panic and I wouldn’t be able to think of good ideas.

Then I smiled a little. I’m acting like I’m scared of two little girls, like they can get the better of me.

Then I frowned a little. It happens some times.

I had one idea. I had the books Sparkles had picked out for Mike and Kelly, along with the new knob for the stove, wrapped in ribbon. We went to the old house and Sparkles walked to the font porch and left her gift at the door.

Then I saw the moving van next door. My ex-next-door-neighbor walked up to me and thanked me for coming to see her off. I didn’t mention how I forgot that today was the day she was moving.

I was so happy for the coincidence. My neighbor had helped watch our girls and we helped her with her house. We were really lucky to have each other. She told us she was moving the same day we put an offer on our new house. It seemed like fate told us both it was time to move onto something new.

After visiting and after the girls gave my ex-neighbor sweet kisses goodbye, I realized that the rain had stopped and something miraculous had happened. It was Austin in July and it wasn’t hot. I turned the car on and checked the outside thermostat. It was 77 degrees. Oh, my! A cold front! This is Christmas in July for real!

So I drove the girls to Northwest Rec Center. This rec center was closed for renovations and the building was pretty torn apart. But, behind the building, there is a small playground just right for young kids and we had it all to ourselves. The picture above is from when we took a break for a snack. The girls had a great time. It felt good to take it easy, go with the flow and have it all work out.

Just about when I started thinking about how well it worked out, I noticed that Sparkles shorts were brown. Hmmm. I felt her shorts. Brown and wet. Ohhhhhh. She had peed and pooped in her panties, then, like any ambitious 3-year-old would do,  she kept playing. It wouldn’t have been the very biggest deal, except she spent a lot of that time on the slide. Yuuuucccckkkkk!

I got the girls buckled in their car seats (with an extra shirt underneath Sparkles) and went back to clean off the slide. Then we headed home to get Sparkles cleaned up.

I still like having a plan on most days. It works better when we want to hook up with other folks or get out of the heat. But it was good to have this kind of day work out too. Maybe things are getting a little easier and maybe I won’t be as tempted to panic the next time I don’t know where to go next.