The Texas State Capitol for Toddlers 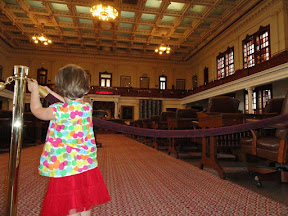 There are so may great things about Austin, it almost doesn’t seem fair that we also get to be the Capitol of Texas. The Texas State Capitol building was first built in 1888 and it had significant renovations and extensions in the 1990s.

Top 5 reasons why my little girls like the Texas State Capitol:

1. The rotunda is round and tall, in layers, up to a domed ceiling, which makes them run in circles with their arms spread wide open.

2. There are lots of stairs that are fun to climb up and down.

3. Besides the stairs, there are the elevators, and they take you underground which is a little scary, but exciting at the same time.

4. When you walk in the hallways underground, you can see bushes above you, through windows in the ceiling, when everyone knows bushes are supposed to be on the ground and how is it possible that there is dirt ABOVE your head?

5. If you stop by the Sergeant-at-Arms office (2W7), the staff will give you a free sticker.

Top 5 reasons why I like the Texas State Capitol:

1. The building is air-conditioned and heated, out of the rain, open generous hours and free. (That is five reasons in one.)

2. The building’s classic architecture if beautiful. (Buildings are art too, so I included the Capitol in AustinKidsDraw.com, here.)

3. The experience is art and exercise in one, with all the stairs and long underground hallways.

4. It is a good experience when extended family is in town. People of every age will find something different to see and think about.

5. Our country’s democracy is messy and difficult and frustrating, but I am amazed like-a-little-kid that democracy is only a few hundred years old and I get to live in the country that invented it. In my small ways that my girls might not understand at all, I try to share this enthusiasm with them.

When my girls are older and have a longer attention span, we’ll take the official self-guided or guided tour.

One important thing to know – in the rotunda, on the upper floors, where you can walk around the circular dome, the railings are historically accurate. This means they don’t meet current safety standards. The rails are far enough apart that a kid can get through. If your toddlers are monkey-like, you will need to stay very close to them or don’t go to the upper floors of the rotunda.

I hope you get to enjoy the Texas State Capitol with your kids! 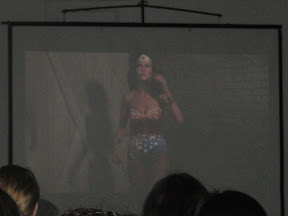 Blue Eyes took the kids on Sunday night, so I made it to two events with a girlfriend. The Wonder Women! The Untold Story Of American Superheroines, a Benefit for GENaustin included excerpts from the documentary and a Q&A with the producer and director. It made me think about ways I can encourage my girls to be powerful and strong, especially since they seem biologically and irrevocably attached to the princess story. 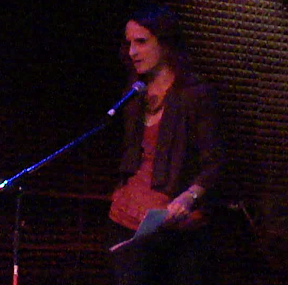 After that, we went to Red Eyed Fly for Frey’s Cafe, a gathering of SXSWi folks who tell live, true stories. Do you know that I tell live, true stories? On this night, I didn’t know much about the people or the event, I just did it, in a brave or misguided way, and it didn’t work out too well. I tried to write a non-offensive black humor story. Whatever you do, don’t do that. I was making fun of this stupid dog, that wasn’t even mine, that died in my car. But I also tried to be sweet to the dog, so I wouldn’t offend animal lovers. So people couldn’t tell if I was sad or mad or if it was OK to laugh. Maybe next year I’ll tell the story of last year’s terrible story. 🙂 (Note that this is a picture of a video and I did not post the video. :)) 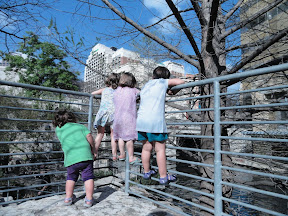 I went on a vacation to San Antonio with a girlfriend and our combined four little girls, ages 2-4. Leaving town is a valid approach for families during SXSW. The trip was equal parts pure joy and madness. There were too many little girls. I’m not that strong. When I get overwhelmed, I tend to lose my keys/phone/camera/purse/laptop and I continued the tradition, leaving my phone at the hotel Tuesday morning, then leaving it again at a restaurant Tuesday night. I’m lucky I didn’t lose the car. I know in time I will remember the pure joy parts more than the rest, and there were plenty of them. 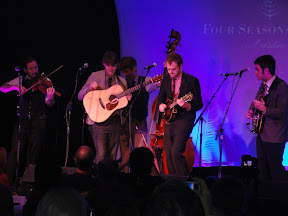 My girls and I made it to the KUT Live at the Four Seasons for a total of about 20 minutes. We saw a few songs by The Punch Brothers, who were amazing, but after the first song, Sparkles found cilantro in her breakfast taco. I know it is considered a good practice for a chef to add something green for flavor and color, but for some kids he might as well poop on that breakfast taco. Sparkles wouldn’t eat it. She was super mad that they didn’t have cereal, her favorite breakfast at home. She was kicking and screaming and carrying on so we left. This is also a valid approach for families during SXSW.

[Uh, a picture of this would have been cute. I guess I got too relaxed.]

My penciled-in idea for Thursday was Guero’s in the afternoon, but the girls were playing sweetly in the driveway with their babies and cribs and blankets, getting them all to take a nap. After San Antonio and The Punch Brothers, I had started to think I might need to sign-up for The Super Nanny TV show, so I decided that I wasn’t going to mess with a good thing. 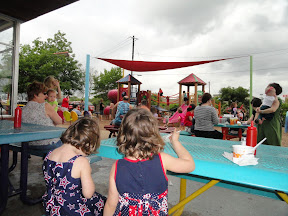 This is a picture from me and the girl’s at Roky Erickson’s Ice Cream Social at Threadgill’s. You might look at this and say it looks like Amy’s Ice Creams on Burnet. Well, Friday morning had a new set of surprises that changed our plans, so I punted on SXSW and went for a sure thing. Punting is yet another valid approach for families during SXSW.

We were all there. Me, Blue Eyes, Noel, Sparkles and Buttercup, at Guero’s, free parking in the garage, free live music in the patio, chips, salsa and tacos calling our names, when we got the phone call. The cable guy was on the way to our house. Did he know I was just about to order my favorite margarita in the whole world? It was a type of emergency, though, because we had no Internet at the house, which could be interpreted to be partially or mostly my fault, so I volunteered to leave my possibly only hour of SXSW in 2012 to meet the cable guy. This is a picture of our modem instead of Chris Crump. 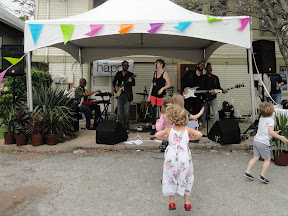 I told my Blue Eyes and Noel that I really wanted to see at least one show during SXSW 2012 and given our pending application for The Super Nanny, I could use some help. The five of us went to Moms Rock from Texas M.I.L.K and we saw Elizabeth McQueen. I especially liked the song about chickens which encouraged some inspired dancing. Texas M.I.L.K. did a great job organizing the event for families, with temporary tattoos, art and crafts and a bubble machine for the kids. I couldn’t decide between all the beautiful things from M Squared Jewelry, so I bought two necklaces. It was a sweet, easy and fun time and a perfect send-off for SXSW 2012, with time left in the day to relax, enjoy some time around the house and get ready for the following week.

But, I didn’t do that. I texted a friend and we headed to Peelander-Z at Springfield Farms. It was drizzly, parking wasn’t easy, the lines for ice cream were long and it could have gone bad. But lucky for me, the band was worth it in an over-the-top kind of way, with wild costumes, group limbo, just about everybody drumming and the guitarist jumping out of a tree. 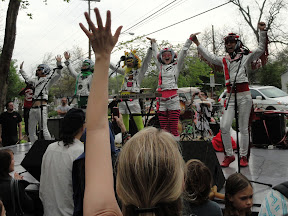 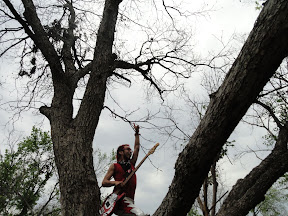 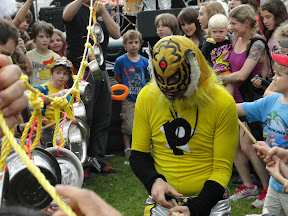 Some might read this review and say it isn’t much of a SXSW review at all, just about everybody in the city saw more SXSW than me, but this is a MOM’S SXSW review and I think it is just as valid. This IS what SXSW for Moms is like. You can’t do it all, you have to go with the flow and you need to really enjoy the times when it all comes together. I can’t wait until next year. See y’all then…

The response has been AMAZING to the posts Top 5 Kid-Friendly SXSW Events 2012 and ANOTHER Top 5 Kid-Friendly SXSW Events 2012. I’m glad that folks like the information and I’m glad I’ve been able to keep the web site from crashing. (Although my right sidebar is broken, what is up with that? If you want to LIKE me, you can scroll down below the posts.) If you are looking for even more information, try out Free Fun in Austin’s Kid-friendly SXSW post. I hope to see lots of families and kids around town next week!

Here are a few highlights from the week… 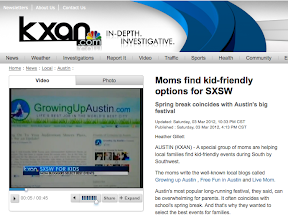 1. David Scott, Austin’s KXAN news anchor, reported the news that GrowingUpAustin.com  is a well-known local blog. Wooohooo! He was talking about FreeFunInAustin.com and LiveMom.com too. Wooohooo again! Check out the video here, on the left. 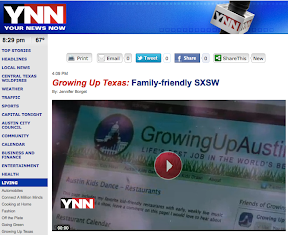 2. Jennifer Borget from Your News Now, reported that GrowingUpAustin.com, LiveMom.com and FreeFunInAustin.com are providing Austin families with valuable information about SXSW activities for your kids. Imagine that! Check out the video here.

3. When I made phone calls to verify information and check on details, I got used to saying, “This is Carol Ramsey, from GrowingUpAustin.com,” like GrowingUpAustin.com was a social media player of some kind. More than once, the person I was talking to said, “Yes, I know who you are” which just about knocked me out of my chair.

It has been a good week. I can’t wait to check out some of the events with my kids. I’ll let you know how it goes!