A Family Painting, Unexpected but True

(If you are visiting looking for SXSW for Kids info, here it is!)

We all have our roles to play.

Noel, our teenager, had forgotten to finish an art project due for school, so she woke up at 4am, got the art box out of the closet and got it done.

(Noel can be forgetful and committed, sometimes on the same day.)

Later that night, Sparkles was working on her homework before going to bed.

(Sparkles can be studious.)

I was focused on helping Sparkles.

(I can be so focused that I tune out other things.)

Buttercup wandered upstairs and found the art box on the floor. This box contains the adult-supervision-required art supplies, which is why it is kept on a tall shelf in a closet at (almost) all times.

(Buttercup can be curious and mischievous and fast.) 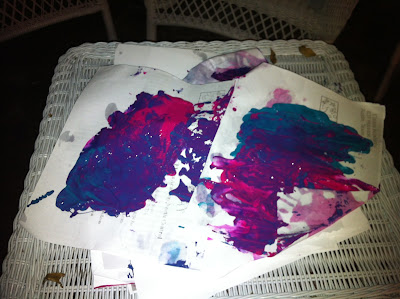 That is how we ended up with about thirty original acrylic oil paintings on 8 1/2 x 11 paper.

And one abstract pattern of outlines, from where the papers that wallpapered the floor didn’t quite meet… 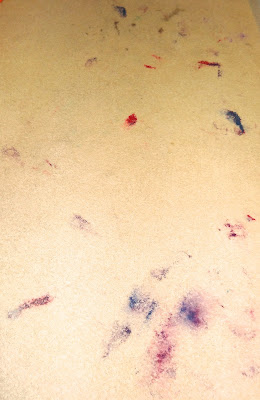 plus little footprints into the bedroom, on carpet. 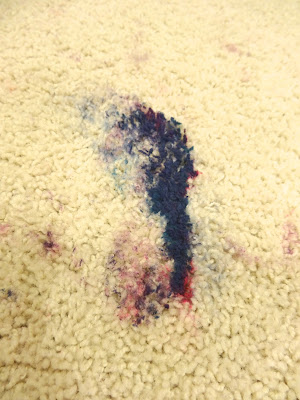 The colors were bright purple, pinks and greens. Buttercups smile was proud and guilty at the same time.

I texted Blue Eyes so he would know to expect something unexpected.

(He is has an easier time, when he is expecting it.) 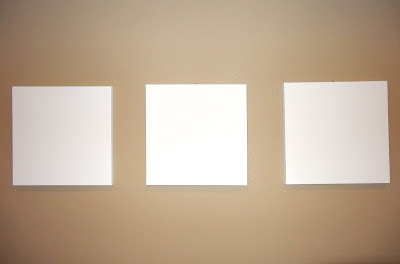 The funny thing is that we bought these paints so that the family could paint the white canvases that we hung in the loft two years before and we never quite had the time. Life is funny that way, how it happens when you aren’t looking, in ways you didn’t expect. We wanted the canvases on the wall to reflect our family, to be the work of our own hands, and the painting on the floor did just that. Our carpet original is unexpected, but true.

Yeah, that would be a contrived and cutesy blog post ending, wouldn’t it? The carpet looks trashy! The kids got in trouble! But it looked trashy before, because Daisy, our Mood Cat, used to pee on it all the time. We were going to replace it already, we were just waiting for Daisy to pass on, because, even through she has stopped peeing on it, she still throws up on it. So if the kids are going to destroy something, why not the trashy carpet? Now we are still waiting on Daisy, which is why she is for sale. Which she really isn’t. (Unless you really want her.) But one day, before too many years, we will have nice carpet again. And maybe, just maybe, painted canvases. The end.

Double Smack Down at EZ’s 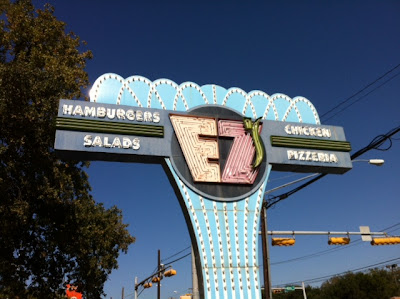 I took Noel, Sparkles and Buttercup to EZ’s for a quick dinner, so we would have time for some birthday shopping for Blue Eyes mid-week. We were eating our dinner when a tall, well-built man came to our table and he said something like,

“This is too much. Just too much. Please control your child. My wife and I are leaving now, but I think everyone in this restaurant would agree that your child is screaming and you really need to do something about it.”

We have a tradition at dinner where everyone says one good thing and one bad thing about their day. Buttercup has a hard time waiting for her turn. At home, if she is talking and it isn’t her turn, we ignore her. Then she gives up and waits.

Tuning out your screaming child is a valuable Mom skill, but it is best practiced at home and not in public.

I agreed with the man that this was very annoying. Buttercup calmed down, mostly because the man made her forget why she was mad, and we finished our dinner.

As we were leaving, there was another tall, well-built man standing next to our minivan in the parking lot. As I approached, he was glaring at me and he said something like,

“Why did you park so close? You could have hit my car!”

I was pretty proud of the parking job, actually. Noel had done it.  Noel had taken driver’s ed and had been driving with Blue Eyes and I for a while. Blue Eyes and I decided that, instead of limiting her driving, we would have her drive as much as possible. That feels safer, to have her more experienced, before she is driving on her own, in more complicated situations.

My right-side bumper is dented from the first time Noel tried to park the minivan in between two cars in a restaurant parking lot.  That was followed by minivan parking practice in empty lots. As we pulled into the EZ’s parking lot, there was a tight parking space on the left and a row of empty spaces on the right. Noel pulled into the tight space, confidently, right down the middle.

I thought that was pretty cool. As I got out on the passenger side, I had to do that sideways move with my hips, but it wasn’t too bad. It was so tight because the other car was parked on the line.

As we were driving away, I realized why he was so mad.

He couldn’t get in his driver’s side door. (I guess he didn’t know about the sideways hip move.) He had been waiting in the parking lot for us to finish dinner so we would move our car. It must have been annoying that we parked in such a tight space when there were so many empty spaces.

I had managed to piss of people inside and outside of EZ’s in just one night. 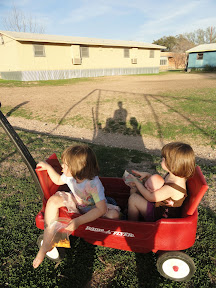 I was heading to an afternoon hike with Sparkles and Buttercup when Sparkles announced, “I don’t like hiking!” She made it clear that she preferred playgrounds and her experiences as a young hiker were over. Oh, no.

It is a balance every parent navigates, to plant the seeds, to set the example, to encourage your kids to have healthy habits that they will take with them when they are grown, habits like spending time outdoors and appreciating nature. But what do you do when your child gives up hiking when she is four?

I rule out the extremes. I’m not going to make hiking mandatory and drag her to the creek kicking and screaming, with the command, “Enjoy hiking now!” I’m also not going to say “OK!” and not take her hiking ever again. In the moment, I knew I needed some time to think, so I didn’t fight it and we spent that afternoon at a playground. We didn’t even hike to the playground, we took the wagon.

Sitting on the bench, watching Sparkles and Buttercup play, I decided a few things were true:

– I like hiking. In a family, everyone gets to do things they like some of the time and hiking is something that I like, so not going hiking at all is not an option.

– Hiking is a slower kind of fun than a playground. The trees have fewer bright colors. The creeks don’t have monkey bars. You have to look closer and imagine more to have a good time. And there is something deeper about the experience, something true and sweet, something that connects us with the world around us. I want my kids to be open to a slower, deeper kind of fun.

– If I battle this head-on, it will turn into a big mess. This situation called for a more subtle and creative approach.

Stay tuned for Wednesday’s post about our next hike, using my subtle and creative approach, that had a surprise ending.