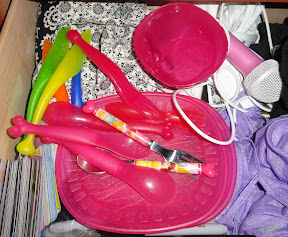 It would be dark.

If there was a book about me and Pinkalicious.

And if Pinkalicious discovered what I hide in my underwear drawer, there might even be a murder.

Pink plates and cups and forks and a few other things like the Ikea kid’s plastic knives and the karaoke microphone.

And even more pink.

With a stash like this, I must be an evil Step-Mom out of a Disney movie. Would you like a bite of my shiny red apple?

But let me explain.

All of the items in my drawer got at least three chances. Three times to be the start of a fight between Sparkles and Buttercup, a fight that made no sense, mostly around who got to use the pink version of whatever they both wanted to use.

Some times when they fight, they get over it and they can share or take turns and sometimes I buy more than one pink version of things, but other times, if there is some thing that caused three fights for no reason, it goes into the drawer while they aren’t looking. It works pretty well because they aren’t old enough to remember enough to miss it.

This is my theory.

I have a fixed amount of generous, loving and level-headed Mom energy to share with my kids. I only as much of this as I really need and some days I run out, so if you are in a leaky boat, you would fix the leak, right? If they keep fighting over the pink plate and they don’t fight over green and yellow plates, then aren’t green and yellow plates a better idea for everyone? 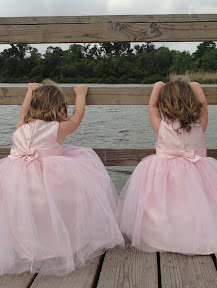 The Easter Bunny got them these pink dresses for Easter, so I’m not all bad. Even Pinkalicious would like the dresses. I just hope she doesn’t ever peek inside my underwear drawer.