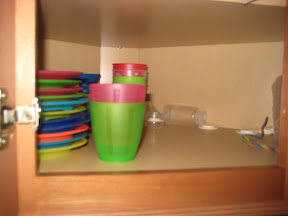 Our house was broken into last night and it wasn’t the first time.

Our bandit is only interested in sippy cups. Some times he hides them and other times he takes them with him. I don’t know why. I just know that I buy sippy cups just about every time I go to Target, the same as diapers and wipes, but some days I still can’t find a sippy cup.

Maybe he sells them on Craig’s List or maybe he uses them in a performance art piece about his difficult child hood. I don’t know.

Or, maybe he is collecting the sippy cups from my house and other houses and he sends them to babies who need them, babies who are spilling their milk, in places where there isn’t a lot of extra milk.

Hmmmm, I like that story. I think I’ll think about it this way, the next time I’m in Target buying more sippy cups. 🙂