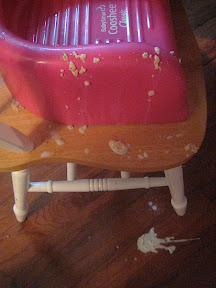 Despite the modern technology and sophisticated software that ensures the right products are in the right stores at the moment we want to buy them, Kellog’s Rice Krispies are no longer available at my house. We have run out and we can’t find it in the store anymore. This shortage is likely to last for months.

A friend told me about her friend who didn’t put milk in her kids’ cereal when they were young so it would be less messy and the kids didn’t know any better until they had cereal at a friend’s house one day. I tried this with Buttercup, but she had already had the milk in her cereal and there as no going back.

It feels strange to take something away that they love so much, especially from Sparkles, because she handles her cereal just fine. But as parents you have so much mental and physical energy to give and it is OK to say, “Hey, I need a break this time.”

Maybe we’ll come up with a new favorite or maybe they will just be very excited when the distribution problems are solved and we have cereal in milk again. For now, I’ll have some more time with my coffee and less time with the cleaning supplies. Don’t tell them what I told you, I just need a little time.