Twice as Good and a Long Way To Go

The dress rehearsal for The Motherhood Instincts Project was one week before the live performance and as I finished my reading I realized that I sucked.

I didn’t think I sucked before, but that was before I saw The Moth in New York City.

I was fascinated by a woman who tied for the win that night.

Her story was terrible.

The theme of the night was Struggle and her story was about being on a bus while she watched a guy running to catch the bus, but he didn’t catch the bus. For the moment of personal growth that comes at the end, she said that now she feels empathy for people who miss the bus. That was the whole damn story.

But she performed the hell out of that terrible story. She believed it and worked it. She had the audience’s complete attention. Her timing was brilliant. Her story wasn’t memorized, it was re-lived in the moment. She nurtured an energy, slow at the beginning, then building, then all crazy and wild, with a sweet snuggle at the end.

The night of the dress rehearsal, I compared my performance with hers. My delivery was a polite and accurate reading of words. My energy was a sweet kiss on the cheek.

I’m a writer. I don’t know what the hell I’m doing trying to perform at all. The words are everything. Aren’t the words enough?

No. They aren’t. Not when there are people in the room.

My girls stayed longer in day care that week. I put down my printed story. I imagined the audience in my living room. I forgot about the words. I tried to connect with them, I tried to sense what they were feeling, I tried to reach into their world and make my story their story too.

After delivering it like that, I rewrote the words. Then I forgot about them again and performed the story another few thousand times for my green couch and coffee table.

Oh, no, I just now looked at the video of the live performance.

I REALLY DO SUCK!

The beginning is verryyyyyy slow. The mike was in the way. I didn’t let go enough, I was still holding back. The audience didn’t laugh like I wanted them to. I should have gotten rid of the notes. How come I’m 44 years old and I still don’t know how to fix my hair and holy cow, my knees look funny, what’s wrong with a nice pair of tights?

THERE IS NO WAY I CAN PUT THIS VIDEO ON MY BLOG!

Only because I love you, here it is anyway.

At least it is better than it would have been without The Moth in New York City.

Next time it will be even better.

I can hardly wait. 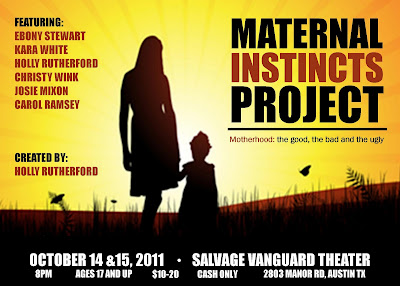 (I’m taking some time off from posts while I work on cool new pages that I think you will love. But, I had to stop in with this one post that I’m really excited about!)

Lights… Camera… Action…
Well, except for the camera.
Ideas, thoughts and stories about Motherhood are on stage this weekend when the Maternal Instincts Project performs at the Salvage Vanguard Theater.
This isn’t your everyday Hallmark card.
Thisis the joy and pain, sacrifice and gifts, life and death of Motherhood.
Come to laugh.
Bring some tissues.
Leave with connection and understanding.
I’m a guest artist at the show and will be doing a reading about the time I held up my OB office without even having a gun.
I would love if you could come.