Those Were My Kids in Wal-Mart Yesterday 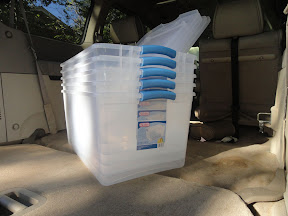 I’m with my girls in Wal-Mart to get plastic organizing tubs to try to make some sense out of our huge mess of a garage.

Sparkles starts screaming because she dropped one of her rings that she made from paper during the car ride over from day care. AHHHHHHHHHHHHHHHHH!!!!!! she cries the same as if it was a gold ring with a precious gem.

Buttercup runs around the corner to look for the missing ring.

Sparkles takes her dress off her shoulders and lets it sit at her waist making for a new type of topless look. Buttercup does the same. They laugh and laugh and run in circles. I get them dressed.

We make it to the check out lane and I pay.

Buttercup grabs a candy bar, unwraps it and has it in her mouth in half a second. I take it from her, check out a second time and then have the cashier throw the candy away.

While I’m doing that, Sparkles opens a to-go applesauce pouch and has it in her mouth in half a second. I take it from her, check out a third time, and have the cashier throw the apple sauce away.

Now I need to get my cart, which is completely full, and two unruly girls, to my van. I ask a friendly-looking man for help. He pushes my cart while I hold my two girls’ hands.

I get them buckled in their car seats.

I get the plastic tubs in the back.

Then they start calling each other stupid.

So, if you were wondering, those were my kids in Wal-Mart yesterday.

Have you ever had one of those days?