The T-Shirt That Almost Cost Me Everything 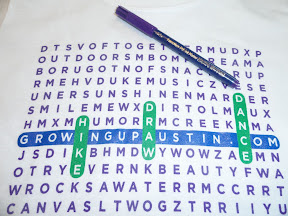 How about these kid’s t-shirts? Super cute, huh? (You still have until midnight 2/9/2012 to win Giveaway Package #2 that includes 2 of these t-shirts.) Well, they almost cost me my marriage because Nick Peoples is on my List.

Two people in a committed relationship keep a list of famous people who they can sleep with, without consequence. When I first got married, I refused to recognize the List because I’m old-fashioned that way. But I lightened up. And it isn’t like Blue Eyes is really going to meet Salma Hayek.

Then, in 2005, my List came in handy. In the most exciting college baseball season of all time, the University of Texas Longhorns won the College World Series to become National Champions.

Imagine just this one highlight. Tied game with Baylor. Bottom of the 9th. Chance Wheeless had a hurt shoulder. The trainer wrapped it when Chance played first base and unwrapped it when he was at bat. In his last at bat, he fell to the ground in pain when he swung and missed. If there ever was a time in all of baseball history for a pinch hitter, this was it.

Chance Wheeless came to the plate. I was screaming my head off and running around the house. How could this be happening? He was crippled! He should be in the hospital!

He hit a walk-off home run to win the game. The team went on to win the College World Series.

So, I put the 2005 UT Men’s Baseball team on my list. They are all still on my list. Blue Eyes claims that I can’t have an entire team take just one spot on my list, but I told him, it’s not like I’m really going to meet them.

I was picking up the t-shirts from PSG T-Shirts when I saw the University of Texas baseball jersey on the wall, framed and behind glass. I asked Larry Peoples, the owner, how he came to have that jersey. He said Nick Peoples is his son, THE Nick Peoples that scored the tying run in that same game with Baylor by slamming into home plate like a freight train, knocking the ball from the catcher’s glove.

My first thought was to tell him, “Hey, he’s on my List!” but that seemed weird.  I’ll keep my List but I won’t ever use it.  I’m still old-fashioned that way.

This entry was written by Carol, posted on February 9, 2012 at 6:00 pm, filed under Mom Stories and tagged baseball, university of texas. Bookmark the permalink. Follow any comments here with the RSS feed for this post. Post a comment or leave a trackback.