Yeah for the Offensive Mommy Jokes 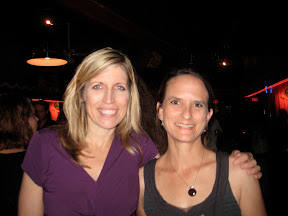 I’m not sure what makes something funny, technically, and why it is that when it is way out there, a little past your comfort zone, then you laugh even more.

Blue Eyes and I went out on Saturday night to the Velveeta Room to see Laurie Kilmartin.

The Velveeta Room was great. Just $10. No minimum drink order. But good drinks anyway. Intimate setting. It is on 6th street, which used to be a hassle, but now that I’m older, I just pay to park and it’s no problem.

Laurie Kilmartin made Mommy jokes. I just loved that. I had seen too many comedy acts with some guy telling guy jokes about how stupid women are and yeah, maybe they were a little funny, but Laurie Kilmartin was more like me and I loved her  Mommy jokes.

Now, let me be honest and say that the jokes may have been disturbing Mommy jokes.  Why is the disturbing sometimes more funny? Maybe because we can admit that it is true, just a tiny bit?

Here is an example of one of her jokes…

My boyfriend and I were taking turns taking care of the baby at night. It was my night to sleep and I wake up to hear my boyfriend scream “If you don’t stop crying, I will throw you out the window!”

I got out of bed, went to his side and said “No honey, let me do it. You are so tired, you might miss the window. I’m well rested. I can do it right. Give me the baby.”

Have you felt that moment? When the baby has been up five nights in a row and she won’t stop crying and you are going nuts and you think about the open window? I mean, you don’t REALLY think about it in any kind of LITERAL way, but it crosses your mind? During the hard times, being a Mom has gotten me in touch with an inner rage that I didn’t know I had before. It feels good to see that in someone else and know I’m not the only Mom thinking she might go nuts.

I found a thread on WhatToExpect.com about how offensive Laurie Kilmartin’s jokes were and how they aren’t worth listening to because the are so negative about being a Mom. That isn’t the sense I got at all. Underneath the jokes, just beneath the surface, I felt that Laurie Kilmartin loves her son a million, trillion times. That is where her emotions and her vulnerability are, that is where she needs humor to find a path through it all.

So, the picture above is me and Laurie Kilmartin after the show. Thanks, Laurie, for making me laugh and by making me laugh, maybe I’ll have a little more strength the next time I have a non-literal thought about that open window.

This entry was written by Carol, posted on August 2, 2010 at 1:39 pm, filed under Mom Stories and tagged laurie kilmartin, velveeta room. Bookmark the permalink. Follow any comments here with the RSS feed for this post. Post a comment or leave a trackback.